Bangkok and unsavoury images associated with it have been much in the news lately. It all reminds me of the time I was newly married and fondly imagined Singapore and Taiwan to be suburbs of Pune, where we live, because my husband travelled there so often.
One day a woman I know, slightly hard of hearing or perhaps with an attention deficit, asked me with concern why my husband went so often to Thailand, and I was speechless with embarrassment.
It struck me then that Thailand is a word that badly needs a euphemism. Scandalous associations have evolved it into an improper expression, to be employed with caution. This is a request to the politically correct brigade to coin and replace it with a more appropriate version forthwith.
Tempering words with unpleasant connotations really needs to be done on a more regular basis. We’ve all got quite used to kindly calling the blind, the deaf and the psychotic as visually, aurally, and mentally challenged. We need no longer say, “idiot!” but can choose between cerebrally constrained, wisdom challenged, logically under-enhanced, and knowledge impaired. A crook is only morally out of the mainstream; a poor person economically disadvantaged, and a jailbird merely a client of the correctional system.
Meanwhile, other concepts have been sullied by repeated usage and mis-usage. Why, for instance, can’t we have a kinder incarnation for the word ‘kitty party’ which unfairly gives rise to the image of vapid, uncultured women on an intense mission to outdo each other?
Another outdated expression is ‘antibiotics’. Nobody wants to be associated with antibiotics any more, and people recommend doctors to each other with the words, “He/she is excellent! He/she never prescribes antibiotics.” And yet, how can an acute bacterial infection be treated? Provide another word, please.
If you have many friends and business associates, you become guilty of having ‘contacts’ and of ‘networking’. It’s not about being friendly and enjoying relationships, but rather about being conniving, exploitative and slimy. Isn’t that sad?
‘Servant’ these days is a pretentious-sounding word; the user is almost certainly upper middle class, and therefore insincere. ‘Middle class’ – there’s another rude expression, topped only by ‘nouveau riche’. What’s wrong with working hard and making a lot of money, I’d like to know?
‘Maid’, meanwhile, is not a happy alternative for ‘servant’, with old maid and milkmaid hovering humbly close behind. Slave, although by no means an alternative, in an interesting turnaround, is no longer a bad word. It has other connotations, such as slavish, which only means flattering, and sex slave, which is fascinating, not scandalous like Bangkok.
When I became a Reiki master, I cringed at the sexist title – but retained it, because I didn’t fancy calling myself a mistress. Similarly, words like mother-in-law and divorcee, with their strident vibrations, definitely need upgrading. And the day someone coins a softer version for that harsh, shrewish, fairytale stereotype, that mythical beast of yore, the stepmother – they are more than welcome to use it on me.
first appeared as ‘War of words’ in a Times of India Middle on 2 Aug 1999

Posted by Saaz Aggarwal at 3:32 AM No comments: 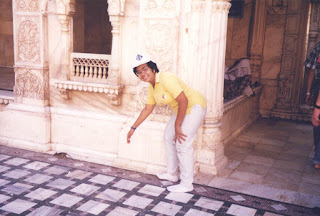 Email ThisBlogThis!Share to TwitterShare to FacebookShare to Pinterest
Labels: Sindh

We completely forgot
that there had been a life
before Us.

Many years of unhappiness
and happiness
had completely disappeared
and we never remembered
that they had ever been
or harked back
to those earlier times.

After all,
we were still young.
It was possible
to start afresh.
The past was all a mistake.
It had taught us many lessons.
We cherished the lessons, and forgot the instructor.

But now
people dead,
and divorced, (drunk),
have crept stealthily back into our lives.

Our adolescent children
show features
and characteristics
they never acquired from us. 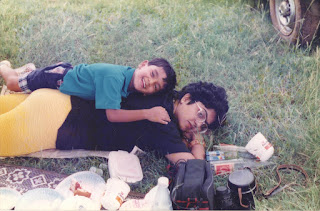 I sit in my car.
A woman with a head load
Trips. She spits at us.


first appeared in Femina magazine 15 Jan 1999
Posted by Saaz Aggarwal at 2:15 AM No comments: