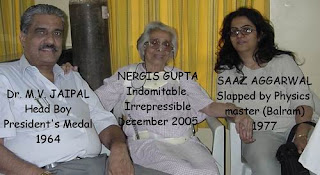 The general ward at Jehangir Hospital, Pune, is a crowded kind of place. When I entered, I looked around for a while before I saw this spunky-looking elderly woman sitting upright near a window, reading the newspaper. Her back was to the sun – sunlight helps in healing she later told me, and she’d asked that they move her to a bed near the window a few days ago.
In case you’d like to spend some time with Mrs Gupta too, she’s in bed 166. They won’t transfer the phone line, but if you call ahead to check that she’s still there, it’s +91-20-26050550 or 26122551, and she now uses her maiden name, so ask for Nergis Barucha. She has been discharged, but is still using the hospital facilities until her relatives decide how she is to be looked after and come to get her.
She wasn’t sure exactly when that would be – “Maybe today,” she said. It kind of reminded me of the time when I was five and in boarding school for the first time (Nazareth it was) waiting for my parents to come visit me. “Maybe today,” I would think when I woke each morning and found, heavy hearted, that I wasn’t at home. But Mrs Gupta isn’t feeling sorry for herself or anything like that – she’s just waiting, practical, cheerful – only just a tiny bit worried about how she will pay the ayah since the money the relatives left when they last visited ran out a few days ago.
Since Mr. Gupta died seventeen years ago, she has been teaching at a school in Panchgani. She told me that she works from 8 in the morning till 7 in the evening. Her favourites are the 1st standard kids, but she still teaches Geography, French and English to classes 9, 10, 11, and 12. And she is very involved in running an English-medium school for underprivileged kids, too. One morning last month, she woke up and started getting ready as usual when she suddenly found – she’s not quite sure how exactly – that she’d fallen on the floor. She got up, tended to herself as best as she could (haldi and sugar, patted around for broken bones, bathed in neem water – you know Ma Gupu) and went off to work. It was only a few days later when she collapsed and had to be driven in to hospital. Here the tests showed her to be in excellent health and physical condition – except for the matter of one broken vertebra. That was three weeks ago.
“Everything happens for the best,” Mrs. Gupta told me. “In ’48 I broke a vertebra and it caught a nerve that affected my left leg. Now that nerve is free and my leg is fine! In any case, I’ve been working too hard. This is god’s way of telling me that I really need to rest.”
Ma Gupu then told me about how she found strength in the story of how a young Tibetan boy had jumped out of his monastery window when the Chinese broke in, hanging in terror to a ledge until he finally said to himself, “in the name of god, I let go!” It worked for the Dalai Lama, and now, when in despair, Mrs. Gupta says to herself, “In the name of god, I let go!” and let what will, happen.
While that’s probably what keeps her so cheerful and relaxed despite everything, it’s also probably why she blithely donated all the money left by Mr. Gupta, including his entire Provident Fund to Lawrence School, for the education of underprivileged children. And why, when a group of OLs got together last year and quietly sent her gifts of money, she put it in a Bank of Maharashtra fixed deposit when the manager promised her benefits of various kinds, but she’s in hospital today without insurance, and she doesn’t even have an ATM card.
Mrs. Gupta is eighty-one years old. I went to visit expecting to see an enfeebled, incoherent, bed-ridden invalid. But she was sitting in a chair, recognized me at once (we last met in 1977 when I was fifteen) and we chatted on and on. She asked after my parents, whom she remembered very well, and I spun out all the “happily ever afters” of my life for her. And she told me about her days as principal at Horseley Hills, and how Mr Gupta died, in Sardarshahr (a town in Rajasthan with, incidentally, the most god-awful roads you can imagine), just one month after they went there to start a school, She even told me about the time she took Ramesh Venkat* himself (a great favourite of Mr Gupta) to the HMs office for some awful misdemeanour. A doctor doing rounds walked by and asked how she was doing. “Preparing for a trip to Everest!” she said.
She wore a full shoulder-to-waist harness. “Makes me look like Jhansi ki Rani or maybe Joan of Arc gone awry,” she joked, and told me how when she’d said that to a group of youngsters visiting an accident victim in the ward, they’d replied, “No, no, ma’am, you look like Cleopatra!”
As I was leaving, I told her that I would spread the word in the OL community. So she said to pass on her very best wishes to all for Christmas and New Year.
In case you want more news about Mrs. Gupta and can’t actually come to Pune to visit her, feel free to mail or phone me, 9823144189. And in case you want to help, do get in touch.
*Present HM of Lawrence
Posted by Saaz Aggarwal at 10:17 AM No comments:

Email ThisBlogThis!Share to TwitterShare to FacebookShare to Pinterest
Labels: Lovedale 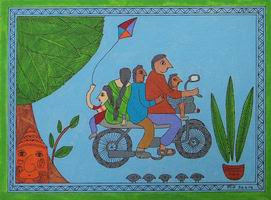