For lovely M on a special birthday

Jewellery made with precious metals and stones is one of the most popular traditions of India. In my father’s community, the Kanara Saraswat Brahmins, it was a custom for married women to wear diamond earrings set in gold in a traditional pattern with seven diamonds each. Those earrings, like other jewellery given to a young woman who was getting married, were family heirlooms. As time went by, the world changed and so did family structures and traditions. In the early 1980s, I inherited eight of my grandmother’s diamonds. Since they were special, I had them set in a four-diamond pattern so that I could wear them all together. However, it turned out that I didn’t care much for the way the pattern sat on my ears. So for years they lay in my cupboard, unused. One day in 2005, my jewellery was burgled. I lost a lot of precious pieces, each of which had special memories. I felt sad and decided to give up wearing jewellery. Then one day I saw my grandmother’s diamonds lying neglected in the corner of a shelf and realised that I should give them the respect and affection they deserved! I had four set into a bangle for myself which I began to wear all the time, and continue to do. And I decided that when the time came I would pass them on to the girls in the family on special occasions.
As one such occasion approached, I began thinking about the box I would gift the solitaire nose-pin in and came across this picture of my grandmother in which she is wearing the seven-diamond earrings. I got it printed and set into a gift box. The box looked so beautiful that I made a few extra boxes and took one as a present (but with no diamonds in it!) for my aunt Sushila.
Sushilakka was born on 8 March 1928; I went to see her a few days after her 89th birthday. When she saw the box she was overwhelmed with emotion and kissed the photo, gazed at it lovingly, and could not speak for a while. Then she told me that the photograph had been taken in Masulipatnam when her father, an officer of the government’s revenue service, had been posted there.
It was 1938, and a ‘famous’ photographer from Baroda visited Masulipatnam. The Collector, the Chief of Police, and many of the other important people of Masulipatnam sat for family photographs and portraits. Naturally my grandfather did too, and this is a portrait of him and his family taken then.
The photographer then told my grandfather that his wife had the most beautiful profile he had ever seen; there was only one other woman whose profile was as beautiful and that was of the film star Sadhana! He asked my grandfather for permission to take her photograph, saying he would be happy to give him copies with no charge. “Of course Papa agreed!” Sushilakka said. This is the family photograph taken on that occasion: Bhavani Shankar Savur and Shanta Savur are standing and their children Bab (Ramanand, my father), Gopal, Sushila and Gool are sitting.
Sushilakka could not remember the name of the photographer but promised to think and phone to tell me later, when she remembered. She did tell me that years later, in the 1960s, she was living in Baroda with her husband and two young children and her father wrote to her, reminding her about the photographer and suggesting that she pay him a visit, which she did. She and her family received a courteous welcome and he remembered her well. In fact, he even mentioned her mother’s perfect profile and spoke of it admiringly all those years later. 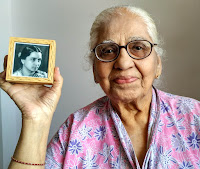 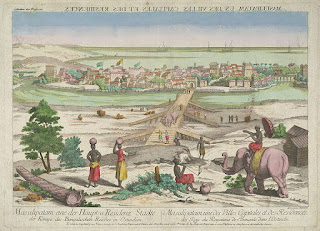 I was moved by the story, and eager to find out more. It turned out that Masulipatnam is a place of historical importance, a trading port on the east coast of India used by the Dutch, the British and French. This engraving is from wiki: “View of Masulipatam. Anonymous. From Philip Baldaeus, A True and Exact Description of the most Celebrated East-India Coasts of Malabar and Coromandel”.
Masulipatinam is still a port and fishing harbour, but it is now called Machalipatnam. It is still famous for the Kalamkari block-prints on textile. A blogger, NP Prasad, writes that this was the place from where the Golconda diamonds were exported for centuries, along with other interesting facts about the place when he/she visited. Read more here. There are also photographs of the place, which make it look very interesting, on this link. They made me want to find a way to ask my grandfather about the place he lived in in 1938, the people he knew, the work he did, and his ideas about various things and his aspirations for his life.
Posted by Saaz Aggarwal at 12:00 AM No comments: