Home out of range

If you lived, say, in Los Angeles, and commuted to work, the most relaxing part of your day would be the journey home.
Commuting, Los Angeles psychiatrists and mental health workers concede, with all its opportunities for unwinding and allowing the day’s events to fall into perspective in the individual’s private space – a sort of limbo between work and home where you are answerable to none – is the most deeply therapeutic technological advance made by humankind. This is what a Los Angeles psychiatrist, visiting Bombay on a powerful grant to make a longitudinal study of why residents of Versova, Marol, and other satellites of Andheri are so insufferable and nasty, confided to me. 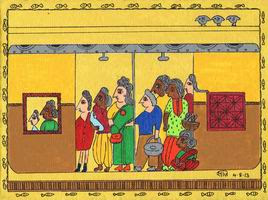 This was several months ago, and we were on our way home (to Marol and Versova respectively). Crouched comfortably on the edge of the stony, crowded planks that pass for seats in the Local, we chatted amicably while other women thrust their bags in our faces in revenge for having occupied places they might otherwise have had, and unwound rapidly to the jerking jiggety-can of the train and the high-pitched complaining sounds that the occupants filled it with. Therapeutic: deeply so.
After a particularly vicious jab on the forehead, the psychiatrist casually, quite without thinking, stepped hard on her assailant’s little toe, looking innocently at me all the while so as not to get involved in any scuffle that might ensue. Marol, Versova, Los Angeles, what’s the difference, I mused. The only way to retain my sanity, I decided, was to dissociate myself from psychiatrists.
So I got myself a lovely little place in Town (yes, truth they say is often stranger than fiction), about as far from work as my former home was from the station, and moved.
It was goodbye forever to the Ladies – train compartment, I mean, not toilet. In one smart stroke I had evolved from being a poor sod in a mob, devoid of identity, into a genuine, suave urbanite.
Two-and-a-half hours of travelling time saved every day, and god knows how many calories of energy. I was the envy of the old crowd I was leaving behind to carry on chopping vegetables on their laps, tearing their mothers-in-law and bosses apart, and shredding vendors to bits for bindis, bangles, and samosas all the way home.
Everything is so much more expensive in Town, they said enviously. Ah, but think of how much I’ll save on transport, I gloated. You’ll find my address easy to remember I went on, trying to conceal my triumph. It’s the same as the number of the train we battled our way onto for so many years.
It wasn’t long before I realized that I’d been gloating in vain. The hours dragged, long winter evenings went on and on. And travelling by bus – that was just no way to go, though I will admit that some conductors came close to compensating my deprivations, the way they harangued passengers for change and flung pathetic old geezers off with a nifty ting-ting of the bell.
Of an evening I’d wander down to Churchgate station and gaze nostalgically at the frantic, grasping, gasping crowd – a wretched, lonely onlooker. It was no good. Being a mere observer only deepened my sense of isolation. I searched for solace and found it one day when I discovered the Colaba Woods.
Now this Colaba Woods is not the venue for a teddy bear’s picnic where tree lovers might bask in forest glades or other such poetic concepts. It is a landscaped garden with parallel tracks for walkers and joggers, and very enthusiastic they are, too.
I’d walk down every evening and relax there for an hour, feeling at home. It was quite a lot like rush hour, with toes available for trampling, large abdomens to jab with sharp elbows, and smelly little brats to jostle out of the way. When the monsoon came by, it was even more jolly therapeutic. I’d march down with my umbrella, delighting in watching the walkers and joggers skip smartly out of my way. It was ever so soothing.
That took care of aggression and subliminal vindictive urges. Adventure was a little more difficult. Where could I find an equivalent of dashing young men leaning at desperate angles from speeding Locals, clinging by the skin of their fingernails to window rods or clutching tightly to the roof, seemingly intent on acquiring a one-way ticket to that great Dombivali up in the sky? There was no easy solution to this. I tried to satisfy honour by watching pedestrians break through rope barricades to make a dash across the road through zooming traffic. Not many got hit but occasionally the wrath of a policeman would nab a miscreant and that would keep me going for a day or two. And when my pining for the rabble of hawkers rose to an unbearable ache, I would catch a cab and persuade it to stop at a traffic light. It wasn’t much, but it helped.
first appeared in Saturday Times 27 Feb 1993
Posted by Saaz Aggarwal at 8:15 PM No comments: