To ma'am with love 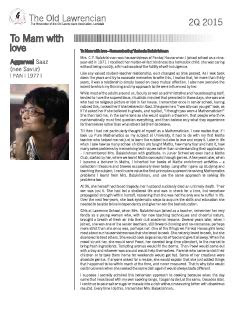 Mrs CY Balakrishnan was housemistress of Pankaj House when I joined school as a nine-year-old in 1971. I recollect her matter-of-fact kindness to a homesick child: she was caring without being cuddly; a firm advocate of the futility of self-indulgence.
Like any valued student-teacher relationship, ours changed as time passed. As I look back down the years and try to excavate memories to write this, I realise that, for more than thirty years, it was a relationship simply based on deep mutual affection. I also now perceive the extent to which my thinking and my approach to life were influenced by her.
While most of the adults around us, faculty as well as administrative and housekeeping staff, tended to have the superstitious, ritualistic mindset that prevailed in those days, she was one who had no religious picture or idol in her house. I remember once in senior school, having noticed this, I asked her if she believed in God. She gave me a “how silly can you get” look, as if I’d asked her if she believed in ghosts, and replied, “I thought you were a Mathematician!” She then told me, in the same tone as she would explain a theorem, that people who think mathematically must first question everything, and then believe only what they experience for themselves rather than what others tell them to believe.
Till then I had not particularly thought of myself as a Mathematician. I now realise that, if I took up Pure Mathematics as my subject at University, it had to do with my first Maths teacher who helped me not just to learn the subject but also to love and enjoy it. In later life when I saw how so many school children are taught Maths, how many fear and hate it, how many solve problems by memorising techniques rather than understanding their application – I remembered Mrs Balakrishnan with gratitude. In Junior School we even had a Maths Club, started by her, where we learnt Maths concepts through games. A few years later, when I became a lecturer in Maths, I inherited her books of Maths enrichment activities – a collection I treasure and browse occasionally even today. Long after I gave up studying and teaching the subject, I continue to value the first-principles approach to solving Mathematics problems I learnt from Mrs Balakrishnan, and use the same approach to solving life problems too.
At thirty-six, she herself had faced tragedy: her husband suddenly died an untimely death. Their son was just five. She had led a sheltered life and was in shock for a time, but somehow propagated strength within herself, reasoning that she was not the only one to suffer in life. Over the next few years, she took systematic steps to acquire the skills and education she needed to be able to live independently and give her son the best education.
Girls at Lawrence School, when Mrs Balakrishnan joined as a teacher, remember her very fondly as a young woman who, with her new teaching techniques and cheerful nature, brought a breath of fresh air into their dull academic lessons. Several years later, when I joined, she was one of the senior teachers, still forward-thinking and no-nonsense; perhaps more strict than she once was, perhaps not. One of the things we Pankaj House girls loved most about our housemistress was that she loved to cook. She not only loved to cook, but she also loved to feed others. She would cook large amounts of food and give it all away. When the mood struck her, she would send Poovi, her devoted long-time attendant, to the market to bring fresh ingredients. Tempting aromas would fill the dorms. Then Poovi would come out with a tray and whoever was around would help themselves. Parents who came to visit their children or to take them home for weekends would get fed. Some of her creations were absolute genius. If anyone asked for a recipe, she would explain that she just added things that happened to be within reach at the time, and never measured. That is why (she would continue) even when she cooked the same dish again it would always taste different.
I suppose I secretly admired this bohemian approach to cooking because when the day came that I was faced with my own cooking range, I began to do just the same. Decades later, I continue to pour salt or sugar or masala into a dish without measuring (often with disastrous results). Every time I do this, I remember Mrs Balakrishnan.
Over the years, I wasn’t just thinking about Mrs Balakrishnan but also very much staying in touch. She and my mother had become good friends (all those weekends getting fed had worked their magic), and we went to see her quite often, sometimes together and sometimes separately, in the different cities where she lived after retiring from Lovedale: Calicut, London and Delhi. Sometimes we would stay over. We always felt at home. There would always be super food, and parcels to take back. One of the important things about these visits was that she would update us on news about everyone we had in common. I wasn’t the only one staying in touch with Mrs Balakrishnan. OLs across the decades would call, write and visit. Here was another life lesson. 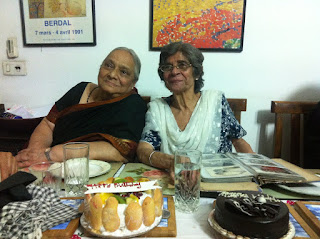 On 19 March 2014, we made our last visit to meet Ma Balu in Delhi. My mother had said, “It’s been too long! Let’s go see her.” After an absolutely wonderful time with her and her family, sharing special memories down the years, looking at old photographs, yakking away into late that night, we returned home to Pune next day. One week later, suddenly and unexpectedly, my mother died. Less than a year later, Mrs Balakrishnan passed on too. I miss them both.