For a woman
to stave off
unwelcome attentions
she must develop
an attitude of
amused detachment
pleasant disinterest
calm confidence
and openly define herself
as centred and complete.

It also sometimes happens
that by the time the woman
has mastered this attitude,
she no longer needs
to stave off
unwelcome attentions.
Posted by Saaz Aggarwal at 12:15 AM No comments:

Finally, the other day, I did it. I gave my husband Arsenic. It was, as they say, Indicated.
He resisted but briefly, then took it like a man. It all began on that annual check-up at the dentist’s, when the kindly fellow offered to extract my wisdom teeth, a saga that ended in bloodshed and tears. But firmly of that cheerful school of thought which vouches that Everything Happens for the Best, I recognized this as a Sign that I must now turn to Alternative Medicine.
Reiki was easy to acquire. Like any fresh convert, I began regaling my friends and acquaintances with my new powers. Until I realized that it was “Not if I see you first!” that they were muttering in reply to my cheery “See you soon!” In an attempt to regain some credibility, I pinched four enormous volumes on Homoeopathic Medicine from a certain kind person and, staggering under their weight, embarked on a voyage of knowledge and discovery.
Soon my mind was agog with all manner of preparations. There was Xanthoxylum and Argentum, Chamomila and Pulsatilla, Gnaphalium and Lycopodium, Sanguinaria and Staphisagria. It was a quaint, faraway world, a poet’s dream.
Of the many useful and interesting dysfunctions I learnt about, I soon noticed a wide gap between what they called Men’s Problems and Women’s Problems. The first focussed on virility, performance and endurance. Women’s Problems, by contrast were, one and all, stern attempts to sort out their messy and disgusting internal plumbing.
Indignant, I sought about for means to inform the Politically Incorrect Language people forthwith.
Homoeopathy, I also discovered, had sweet and simple, miraculous provisions for everything from fever, warts and piles to the pains of childbirth – and even shyness and masturbation.
Making out a list for brain tonic, cures for talkativeness, chocolate addiction and pain in the neck, I rushed to the friendly neighbourhood homoeopathy store. And found, to my dismay, that a huge population had had the news in advance and were waiting their turn before me. A disinterested and rather po-faced woman stood placidly behind the counter, ignoring the waiting customers with unmistakable satisfaction. I whiled away my time thinking up a homoeopathic remedy for her condition. And in case you have had a similar experience, here is my prescription: Silli Nit or Silli Tart. If this doesn’t work, try Yucks Vom. And if you still have no improvement, give her a dose of her own medicine, Kali Bich.
first appeared as ‘And the sceptics be poisoned’ in Indian Express Time Out on 5 Dec 1998

Posted by Saaz Aggarwal at 3:30 AM No comments:


Fudge, by the very sound of the word and the reverberations it causes between palate and gullet, is the sweetest delicacy ever known. It is the ultimate fantasy of the food-obsessed boarding school child, from Billy Bunter to greedy Edmund in The Lion, The Witch and The Wardrobe, to me and my friends; a longing we carried forward into sober, ponderous adulthood.
But at childhood haunts, unfriendly disappointment awaits. King Star and Modern Stores in Ooty no longer make it the way they used to. Times have changed – or perhaps it is only tastes which have become more sophisticated. Going by the theory that there is a fudge-hillstation connection, thanks to the British, Lonavala, now closer to home, beckons but once again disappoints. So-called chocolate fudge can be bought at many shops which also sell chikki and fruit squash. But it is to real, honest-to-goodness, yumptious-scrumptious chocolate fudge as sandpaper is to papad; as sawdust is to molagapodi.
With the onset of the Industrial Revolution, fudge could be manufactured in process batches and took the world by storm. In the early Nineteenth Century, it was the British who monopolised the world of confectionery, a tradition they retained. The perfect fudge can be had at various locations in Britain. One such is Ye Olde Tucke Shoppe, a boarder’s dream if there ever was one, in the little smuggler’s town of Rye. Rye, in the south-east of England, has marshes, a quaint old town wall made of stone, and a lighthouse, and one can all but see lights flashing on the hilltop and Uncle Quentin getting grumpy because he is allergic to Timmy the dog. Perhaps Enid Blyton was never your thing. Enjoy the fudge anyway.
If Rye is too far off, here’s how to make your own chocolate fudge which is just as good. Put equal quantities of malai (skimmed off the top of boiled milk) and sugar, and approximately three tablespoons of cocoa per cup of malai, into a thick-bottomed pot. Cow’s milk malai gives a better flavour – but go ahead and use what you have. Cook on low heat, allowing the sugar to melt gradually. 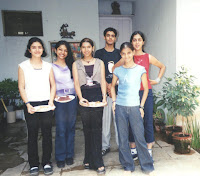 Stay alert as you mix – this is a task that needs your full attention. Your mixture will soon blend into a molten dark-brown, delicious-looking mass. Keep stirring as it thickens, until the first signs of drying on the sides of the pan which you have to scrape. Don’t wait too long now or the ghee will separate. It will still taste good, but it won’t be fudge.
Pour onto a plate lightly greased with butter. Wait for a bit and cut with a blunt-ish knife while still warm.
Allow the fudge to cool but help yourself as it sets; as creator, you have sole rights to the gooey stage.

Email ThisBlogThis!Share to TwitterShare to FacebookShare to Pinterest
Labels: Recipe

Medal in the Sky

It was early evening as the train pulled into the yard outside Jhansi station. The year was 1974. For many of the boys on this forty-day educational tour round the country, part of their final-year engineering course, it was the first trip outside Delhi, and they were determined to make the most of every moment.
As Ajay, Sunil, Ajit and Satguru stepped into the town, it struck them that Major Dhyan Chand lived in Jhansi and on an impulse, they decided to go and seek him out. They stopped an autorickshaw. “Dada!” the auto driver exclaimed, wagging his head with enthusiasm. He drove them to a playing ground where the hockey legend spent most of his evenings coaching. But he was nowhere to be found in the crowd of players. Disappointed, but still excited and proud to be taking fans to see the great man, he ushered them back into his vehicle and drove on.
They pulled up outside a small village house with a mud wall. A cow was tied in the enclosure. No one was about, and they hesitantly entered. A woman came out and when they stated their mission, welcomed them warmly and seated them. They declined the offer of tea – surprised at being treated like honoured guests when they had been uncertain of even a glimpse of their hero.
The kind lady went inside and they could hear her bustling around. Suddenly, Satguru spotted the Olympic gold medal. There it was, hanging from a nail on the wall. In awe and excitement, the boys got up to examine it, daring to let their fingers stroke its contours before they sat down again, silent and awkward.
The front door swung open and Major Dhyan Chand strolled in. Introductions were made, and the gangly, tongue-tied boys called on their halting powers of adolescent conversation. They politely asked about his routine, and how his son Ashok Kumar was doing. The gold medal was taken down, and they each marvelled over it again (this time officially). Dhyan Chand, the incomparable hockey idol was the most unassuming of people – simple, fulfilled, and relaxed. Somehow, an autograph just didn’t seem necessary. The auto driver was waiting to take them back to the railway station and stoutly refused payment for his services.
Ajay told me about this incident decades later.
We were on board an Indian Airlines flight from Delhi. Coffee had been poured, and Ajay picked up his cup – and it nearly clattered from his fingers when he saw who had poured it. He smiled and asked eagerly, “Ashok Kumar!”
The steward stepped back, embarrassed, and mumbled, “Yes,” his brilliance on the hockey field camouflaged under a new persona. His smile was polite but there was not the slightest flicker of pride at having been recognized – not even a trace of memory of his days as one of the top sportsmen of this country. Even when we stepped off the aircraft, there was the former Olympic player standing by the door, wearing the bland, trademark IA namaste smile and a distant, formal expression in his eyes.
For years to come, when Indian media moaned about India’s poor showing at every Olympic Games, I thought about Ashok Kumar standing at the aircraft door, a non-entity hero, and felt a pang of pain thinking about how the Indian government and the Indian people have failed our sportspeople.
first appeared as a Times of India Midde on 2 Dec 1998
Posted by Saaz Aggarwal at 9:27 AM No comments: