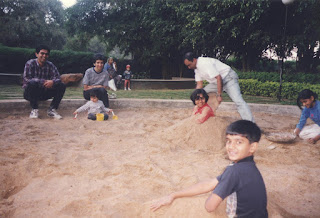 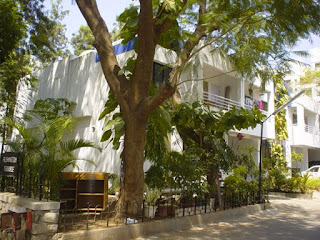 I did actually have my camera with me. The sky above shone a brilliant blue, and a pair of lovesick goats frolicked blithely. Beyond the haphazard vegetation, the Lego-brick blues and yellows of Clover Village peered over its walls. It would have made a wonderful photograph, the ideal cover for The Lonely Planet Guide to India. But I didn’t dare. The woman was younger than me, and despite all my celebrated strength, she could probably run faster – even mid-stream. Even with the basket on her head.
I myself was dressed in maroon trousers and a white cotton shirt with large flared sleeves. I looked, if I must retain my reputation for honesty, somewhat like an escapee from the Osho International Meditation Resort, perhaps fatigued by the flapping of the sleeves in one of the more energetic jumping-about meditations, and a little inappropriate for the office, some might say.
The thing is, I tend to be a bit nonchalant in the matter of dress, egotistically presuming that garish personality, if bandied about loudly enough, easily prevails over shortcomings in other areas. Just the other day, I was lunching with my friend Shanaz, when she suddenly started to laugh. It began with a flickering smile and built up into a rollicking, eye-watering guffaw. If we’d been eating fish, she’d have surely choked on a fishbone. The waiters drew up in concern. And what was so funny? Apparently madam had suddenly been overcome with a vision of the footwear I had worn on my wedding day.
And another time recently, I went out to dinner wearing my large black sweater with golden motifs on it that makes you look like a Christmas tree. One of the other guests admiringly confided that she had something similar, bought in London, and inquired if mine had the same lofty provenance. I had to confess that I’d bought the thing for a hundred bucks off a cart at Shivaji Market and in the years that followed have worn it to every single outdoor event between November and March. I take it as a tribute to my personal audacity that no one has ever given me one of those sneering ‘haven’t I seen that thing before’ looks. Anyway, if you happen to see a large, bossy-looking woman wearing that black sweater one of these evenings – hello there, it’s me.
Some parts of this appeared in Saaz ki Awaaz under the title A brighter shade of pale in Times of India, Pune on 14 Dec 2006
Posted by Saaz Aggarwal at 5:25 AM No comments: