Posted by Saaz Aggarwal at 12:04 AM No comments:

On a day like this, I feel grateful that I don’t live in Bombay anymore. Fifteen consecutive Bombay monsoons cured me of the concept that rains might be poetic or romantic because in Bombay what the rains represent is the stink of damp clothes, soggy biscuits, fungus on every untended surface, and turds and plastic bags that flap around your ankles as you try to cross a flooding road. (For a longer whine, please read Monsoon country 1)
One of the most striking annual features of those fifteen years of monsoon was a newspaper front-page headline which said, “City limps back to normalcy”. Usually on another day there would be a three-column photograph, an overhead street shot which showed nothing but large black Bombay umbrellas. Though the photograph was doubtless shot fresh every year, it looked like the same photograph. Surely they were the same umbrellas. 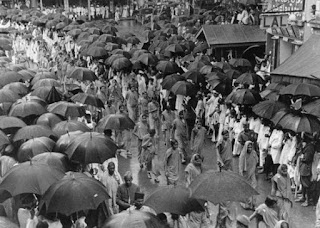 What ever happened to those umbrella photographs? I went looking for one a few years ago to illustrate something I wrote about in my book on stories from Sindh but could not find one and felt sorry that I had to send the book off to print without it. Eventually, I came across this on pinterest.
The reason I wanted it for the book was because something my mother told me made me realise that in Sindh in the 1940s, an umbrella was less a household item and more something you saw only in movies and magazines. What could the displaced people of Sindh, who had lost everything they had and arrived with nothing in Bombay, thought and felt when they encountered the relentless torrents of rain and the acres of jostling umbrellas of their new home?
Posted by Saaz Aggarwal at 9:15 AM No comments: 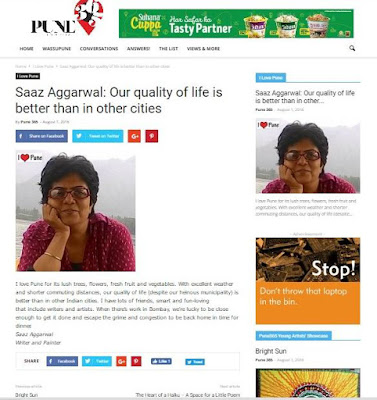 Posted by Saaz Aggarwal at 12:43 AM No comments: