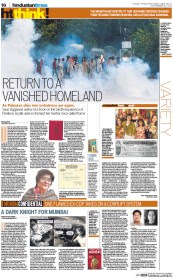 Return to a Vanished Homeland

There are times when you climb into the wardrobe, grope around expectantly, and encounter only its impassive, wooden back. And there are times when you peer past the coats … and a chilly breeze hits your cheek! With mounting excitement you gaze through the wintry landscape, and spot that beloved lamppost. It was the same sort of feeling that overwhelmed me when I opened my passport that day in March, and found I’d been granted a Pakistan visa.
There are places in this world that hardly anybody knows about, which even fewer have access to. When you travel there, you come back changed. You have visited a forbidden land; it has left its mark on you. That’s what happened to me.
Until then, Pakistan had been a villainous, danger-strewn place which existed with the purpose of killing Indian soldiers; sometimes beheading them in a dastardly way. Occasional blips revealed a different reality. A Pakistani couple once stayed in our home for a week. We were so alike, it was uncanny. We became friends. They pointed out an oddity we had previously taken for granted: Pune has many Karachi Sweet Marts. Our two cities obviously had a fundamental connection that had never been explored. One day, their adult daughters visited. We got along swimmingly. In the course of enthusiastic conversation, one of them asked me, “You are Hindu? Really? Hindu? I can’t believe it!” She stared into my eyes, and shuddered. It struck me that we had somehow been conditioned to view each other through distorted mirrors.

Some years later, the time came when, after two generations of silence, I began to learn about my blood connection with the horrid enemy country. My mother, Situ Savur (nee Bijlani), told me a little about her childhood in Sindh. I wrote a book, and found myself accepting an invitation to her vanished homeland. The back of the wardrobe gently gave way, and in we stepped.
It was Narnia in the rule of the White Witch. In February 2013, as we attended the Karachi Literature Festival for the launch of my book, a bomb killed 200 people in Quetta. There was outrage and fear. People went about their lives silently, bravely, helpless in the clutches of evil over which they had no control.
Under these forces, the quality of creative output we saw, in literature, music, clothing, dining venues, art curating – on brightly coloured lorries – was outstanding. It was heartrending.
Another important thing happened. The warmth and hospitality my family and I received changed our feelings not just towards Pakistan but towards humankind. Leaving was a wrench. The parting pangs were reminiscent of the desolation of early childhood boarding-school homesickness. Perhaps they arose from a cellular memory of my grandparents’ Partition pangs.
A year later, the chasm opened anew. I returned, to attend a seminar organized by the Sindh Madressatul Islam University. With disbelief (and gratification) I had seen my book read and enjoyed by Sindhis around the world, praised by academics and historians. But I was unprepared for the newspaper report referring to me as ‘the Indian scholar Saaz Aggarwal’. The … who? It was like being called ‘Daughter of Eve’.
This trip would be unforgettable in a sad way. Hours after I returned, my mother died. She was 79, had led a good life, and passed on peacefully. It was not a tragedy. But I was unprepared.
Just two years before, she had begun handing over to me the baton of a previously-concealed heritage. Her neglected memories surfaced and, like grimy treasures, glistened with the polish of attention. What we excavated brought me new life realities; new interpretations of myself. The process was therapeutic for her too. She woke from happy dreams of loved ones from olden times, re-established links with cousins, recalled long-lost traditions. I felt devastated that she had abandoned our project (abandoned me) so callously.
Clearing out her house, my brother and I came across something she had written years before, a lovely little anecdote that was missing from my book: my mother’s contribution, from beyond the grave, to the paper, Wherever, which I submitted to the university. 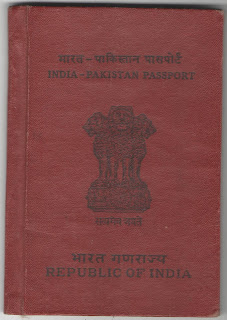 We also found a 1957 document belonging to our father, Ramanand 'Bob' Savur. It was a red hardcover booklet, a historic ‘India-Pakistan Passport’. Supporting correspondence told us how the chasm had opened for him. I remembered the tears that filled his eyes when watching TV coverage of calamitous events in Pakistan.
We knew that he (a south Indian Brahmin who met my mother in college in Bombay) had visited Pakistan as a young man, and that his passport had been misplaced by the police, causing him anxious moments at departure. I knew I would treasure the precious passport, one that belongs in a museum, as long as I lived.
For me, too, leaving Pakistan had been difficult. Both times, complications arising from bureaucratic requirements had caused panic at the border. As I wait for my next Narnia episode, wondering when and how it will happen, I ponder on these minor traumas, dying tremors of the uprooting of a generation from its homeland.

This article first appeared in Hindustan Times on 7 September 2014