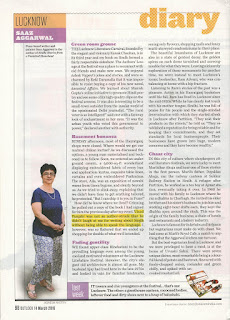 It was a Sunday afternoon, and most of the Hazratganj shops were closed. Where were we going to get our mulmul chikan kurtas? As we disappointedly discussed the options, a personable young man materialised and beckoned us to follow. In a few minutes, we had entered an underground cavern, a 6000-square-foot wonderland displaying embroidered fabric of every hue and application: not just kurtas but exquisite table linen, curtains, and even embroidered Pashminas. This was not the mid-1980s SEWA revival of chikankari visible in street stalls all over India. The store, Ada, was an exposition of nawabi wares from times bygone, and clearly beyond us. As we tried to slink away, explaining that we didn’t have time to get anything tailored, he protested, “But I can ship it to you in Pune!”
How did he know where we lived? Grinning at our incredulous expressions, he pulled out a copy of the book I’d signed for him after my event the previous day. Vinod Punjabi was not so author-struck that he didn’t laugh at me for having written a book about Sindh without being able to speak the language. I, however, was so flattered that we ended up shopping for double of what we’d intended.

The Lucknow Literature Carnival, founded by the elegant and visionary Kanak Chauhan, is in its third year and my book on Sindh formed a fairly respectable sideshow. The festival’s Authors’ Lounge was a place to reconnect with old friends and make new ones. We enjoyed Ashok Vajpeyi’s jokes and stories, and were so charmed by Keki Daruwalla that it was impossible to resist buying a copy of his new novel, Ancestral Affairs. It was interesting to learn about Manish Gupta’s online initiative to promote Hindi poetry and see some of its high-quality clips on the festival screens. It was also interesting to be a small-town outsider from the insular world of the opinionated Delhi journalist. “The rural voter is so intelligent!” said one with a faraway look of enchantment in her eyes. “It was the urban youth who voted this government to power,” declared another with authority.

In Lucknow we found upperclass Hindustani to be the prevailing language – even among the young, cool and motivated volunteers at the Lucknow Literature Festival. However, the city’s elegant old architecture is almost all gone. My husband Ajay had lived here in the late-1970s and looked in vain for familiar landmarks, seeing only flyovers, shopping malls and fancy multi-storeyed condominiums in their place. 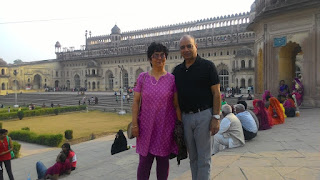 The beautiful Imambaras of Lucknow are also in a state of genteel decay, the golden spires on each dome tarnished and unrecognizable for what they were. We left a leisurely exploration of these exquisite monuments for another time, and went instead to meet Lucknow’s iconic bookseller, Ram Advani, who was convalescing at home with a hip fracture. 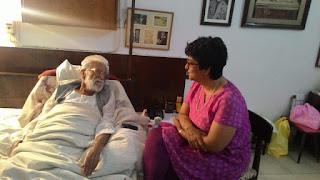 Listening to Ram’s stories of the past was a pleasure. Active in his Hazratganj bookstore until his fall, Ram has lived in Lucknow since the mid-1920s, when he was a toddler. While he has clearly lost touch with his mother tongue, Sindhi, he was full of praise for his people and the single-minded determination with which they started afresh in Lucknow after Partition. “They sold their products on the streets,” he told us. “They established a reputation for being reliable and for keeping their commitments, and they set standards for local businesspeople. Their businesses have grown into huge, modern concerns and they have become wealthy.”

In this city of culture where shopkeepers attend literature festivals, we were lucky to meet Murlidhar Ahuja and hear one of these stories in the first person. Murli’s father, Dayaldas Ahuja, ran the railway canteen at Sukkur Railway Station in Sindh. A refugee after Partition, he worked as a tea boy in Ajmer Station, eventually taking it over. In 1960 he moved with his family to Lucknow where he ran a dhabha in Charbagh. He invited his elder brother and his sister’s husband to join him and, working eight-hour shifts each, they kept the dhabha open around the clock. This was the origin of the family business, a chain of hotels and restaurants and a bakery industry.
Lucknow is famous for its kababs and biriyanis but vegetarians must make do with chaat. We had some at Murli’s Royal Café, a match to anything that the Aggarwal kitchen can turn out.
But the best vegetarian food in all of Lucknow, and we were privileged to have a meal, is at the home of Urvashi Sahni. There were seven unique dishes, most remarkable of which was a colourful blend of potato and beetroot, flavoured with finely-chopped onion, coriander and green chilly, and spiked with uncooked mustard oil.

Urvashi founded the Study Hall Foundation for girls’ education nearly thirty years ago and her work has transformed the lives of thousands of young women in and around Lucknow. While the Study Hall School initially seeded her other initiatives – a school for underprivileged girls; a special needs school; a centre for learning; a rural school; an Open School centre for children of migrant workers; and an NGO, Didi, that creates employment for the girls’ mothers – outside funding was essential for growth. Urvashi told us that one of her biggest donors is the Kewalramani Foundation.

With its IT towers and trendy youngsters, typified by the courteous and motivated team of volunteers at the festival, who would say that Lucknow was the capital of a backward state? One morning, however, I peeped into the canteen of the luxurious (but poorly maintained) government guesthouse a friend had arranged accommodation for us in, and saw a dozen or so cocooned bodies sleeping on the floor. Leftover food from the previous day lay uncovered on a platform. Packets of dal, spices, cashewnuts and other items were randomly scattered on a low shelf. Underneath the shelf was a basin heaped with delicious-looking balushahi, and next to it lay a pair of someone’s dirty shoes.
an edited version of this diary first appeared in Outlook magazine issue of 14 March 2016
Posted by Saaz Aggarwal at 11:22 PM No comments: