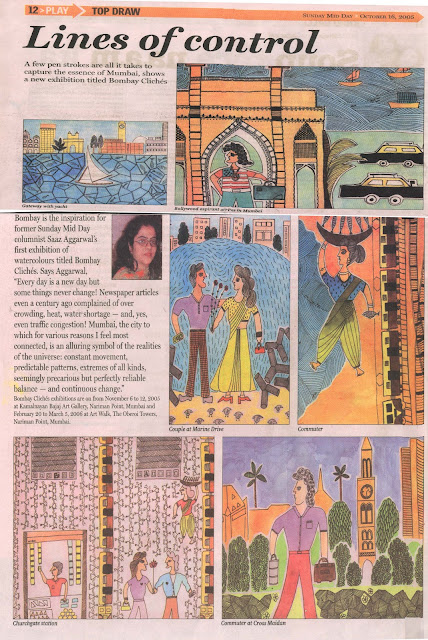 Kamalnayan Bajaj Art Gallery is a pristine space – beautifully maintained and managed. As someone without training or experience or even artist friends, I am so very fortunate to have had my first show in this classical and highly-regarded gallery, from 6 to 12 November this year.

By another stroke of great good fortune, the show was covered by many publications – including every major newspaper in Bombay and Pune. Partly this was because of its theme – Bombay. But the real reason for the huge publicity was because it was the prominent art critic Ranjit Hoskote himself who gave me the names and phone numbers of all the art correspondents. I know Ranjit because for some years we worked in the same office (Times of India, Bombay) and I’m very grateful to him for sparing the time to view my portfolio and for his generosity in sharing the names and numbers.

The biggest coverage was in Sunday Mid-day (seen alongside) which does not have a particular art correspondent, but when I called the desk to ask if they would cover my show, the person who picked up the phone happened to be Alpana Lath. When I introduced myself, she told me that she used to make the pages when I wrote a column for the paper in the mid to late 1990s. She was now the editor, loved the images I sent her, and when the paper appeared with a full page devoted to them I was absolutely ecstatic.
I’ve posted quite a few of the press clippings here, as I am very proud of them! Some were phone interviews, since I live in Pune. However, I visited the Time Out Mumbai office where editor Naresh Fernandes – whom I also know from my days with the Times. It was in the early 1990s, and he had just started his career; I enjoyed his writing style (as he did mine), and I made an effort to stay in touch, including during his stint with Washington Post. Naresh too found my work interesting, and it was a real thrill for me to be featured in Time Out!
All this press coverage, interestingly, did not bring a huge crowd of visitors to the show! Very few people actually came off the street and most of those who did were art students or people on a lunch break from nearby Nariman Point offices. It was a pleasure to interact with them and a spiritual learning experience to observe different reactions.
My first buyer came in on the second day of the show. I had brought around fifty paintings to exhibit – how and why so many were made in such a short time is described in these press interview clippings – and I spent that first long buyer-less day, 11am to 7pm, in the anxiety that I was going to have to take them all back home. The first buyer was an art collector, Sidharth Bhatia, who had read about the show in Sunday Mid-day. In fact we were acquainted, as he used to work with the Independent when I was with TOI ; they were owned by the same company as the Times and had their offices in the same building. 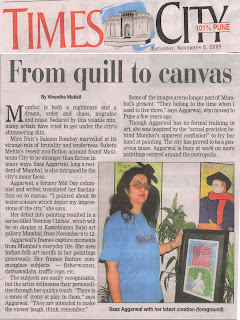 Not surprisingly, there were quite a few paintings left at the end of the show. But I was lucky again, as they were all packed and taken on commission by Niloufer Kapadia of the elegant Fourth Floor gallery at Kitab Mahal. She had read about the exhibition on the alumni network of The Lawrence School, Lovedale, where we both had the great good fortune of having studied at.
When I read what I’ve written above, it strikes me that the success of my show was much more about being in the right place at the right time than any particular artistic talent. And I think that sentiment is also reflected in the welcome note I wrote for visitors to the gallery, which I displayed on its notice board: 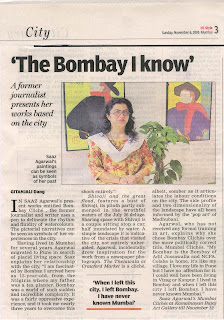 And thank you for visiting this exhibition of Bombay Clichés!
I lived in a city called Bombay for many years.
All that while, I never forgot the feeling I’d had, when I first came here as a teenager (an extremely awkward teenager from a rather cloistered, privileged background) of being an outsider. The feeling came back to me very strongly when I started working on these paintings and I noticed that my characters had turned out (quite unwittingly) to be rather calm and self-contained, so caught up in their own private worlds that they cut the viewer out completely. This reminded me of how I felt back then.
Today, nearly 3 decades later, and having lived away for 12 years, Mumbai is still the city to which for various reasons I feel most connected. When I started working on this collection, my idea was to use simple line strokes to portray the complexity that makes Mumbai an alluring symbol of the realities of the universe: constant movement, relentless expansion, predictable patterns, extremes of all kinds, seemingly precarious but perfectly reliable balance – and continuous change. I added the pen embellishments partly to represent the frolic and bustle, partly because I was trying to create an innocent, folk art effect - but in the end because, really, I’m a writer and not a painter at all.

The paintings are priced at Rs. 5000 each.
In case you want one which you can’t see here – any particular scene, colour combination, design – I’ll be happy to make it for you!
Here, then, is my outsider’s view of “my” Bombay. I hope that you, visitor or native, will feel the warmth and humour of these scenes as I do.
Saaz Aggarwal 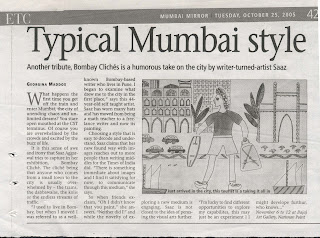 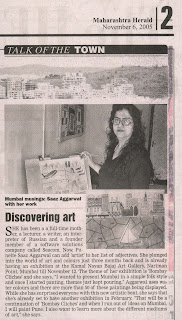 Posted by Saaz Aggarwal at 5:45 PM No comments: