In Mumbai when the temperature drops below 25°C, people start shivering and pretending that they are about to catch a cold, in a transparent attempt to trot out the woollens they acquired on their last trip to Kodai or Simla or possibly even Zurich. We Pune people, being more worldly, experienced, and tolerant, to say nothing of modest, are a more hardy lot. This season the minimum temperature inched to the wee single digits before the newspapers started crying Cold Wave, and only then did we consider ourselves truly entitled to feel cold.
Still, I stopped short of getting out my thermals. I quieted the urge by reminding myself of the time I was sitting in an aeroplane, about to land at Amsterdam airport, and heard the pilot cheerfully announce that it was 2°C outside.
Now this was some years ago, in what I like to fondly remember as My Young Days. I had never experienced 2°C in the daytime before – wasn’t expecting to, in fact, and had arranged to protect myself from the elements only with the help of two sweaters which I had knitted myself. One was in my suitcase in the hold, and the other I was still working on. Overcoats, I had always assumed, had been created only for sissies and hypochondriacs. I began casting off in a panic.
It so happened that on that occasion I was travelling with my two-year-old daughter and I said a little prayer that the 2°C wouldn’t, well, cause her to catch a cold. As it happened, it didn’t, and we came back to Schiphol airport after a short stay in Holland, survivors, to catch the flight to London.
At the gate just before we boarded, my daughter announced to me an urgent desire to relieve her digestive system of its wastes. (“Mummy – kaka!” she explained briefly, with the kind of expression that brooks no argument).
Amsterdam airport in those days was the most splendid place you could imagine. Every gate had its own toilet and we promptly headed for the nearest one. Business hurried through, I looked about for the flush. And was horrified to find that there wasn’t one. I pulled every lever I could see, twisted and tugged and wrenched at every metallic projection in sight. Nothing worked. The other passengers had probably finished boarding by now, but I was hesitant to leave a dirty toilet behind and bring everlasting disgrace to my country as one of third class, third world people who don’t even know how to flush a toilet. Just when I was about to give up and leave the job – to an Asian toilet cleaner no doubt, because in those days airport-toilet-cleaning was an industry dominated by South Asians – I noticed a subtle outline depicting a hand on one of the tiles behind the commode. Some primal urge, some deep instinct of self preservation, made me place my own hand over it. Just place: no force, no pressure. That was it; I’d managed to crack the code. The flush gushed into operation. A tremendous feeling of lightness and elation flooded my being. We raced for the plane. Ah how much one learns when one travels! I knew I’d be dining out on this story, no matter that the subject was hardly one appropriate for the table, for years to come. 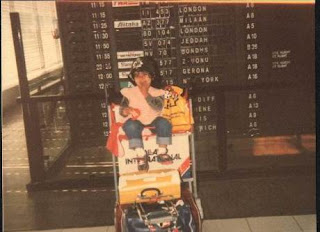 But wait, there’s more. We stopped again at Schiphol for our connection on the way home. Standing outside a locked door, I wondered impatiently why the person inside was stalking about like a caged tiger. A sheepish-looking Indian woman stepped out apologizing that she hadn’t been able to find the flush.
This was my moment! I stepped forward proudly with the accomplished air of a jetsetting international traveller. “Oh, the toilets at Amsterdam airport are extremely high-tech,” I gloated with great sophistication, and kindly showed her how to do it.

Some parts of this appeared in Maharashtra Herald as ‘Yuckity Yak’ on 9 Feb 1997
Posted by Saaz Aggarwal at 10:01 AM No comments: