How I transformed myself

I walked smartly down the corridor,
and from the corner of my eye
I inspected my reflection
In the reflecting glass wall
overlooking the runaway
at Sahar airport.

All around me,
people were dressed in their best,
and looked beautiful.
(After all, they were travelling abroad.)

Only I was ungainly,
too fat,
and my stomach protruded.
What a strange, unattractive gait I  had!

Then I thought –
let me pretend
that the reflection is someone else,
that the woman in the glass wall
is a stranger.

Suddenly I saw
the woman in the glass wall
transformed.

She was beautiful and appealing
and even glamorous.
and I felt much better. 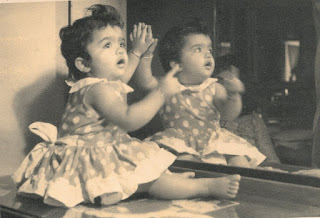 Posted by Saaz Aggarwal at 12:05 AM No comments: 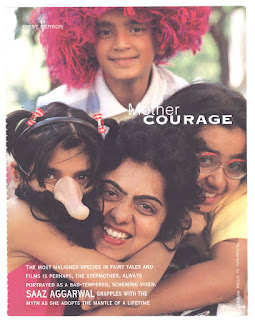 “Uck!” she said, peering with comic and exaggerated suspicion at the pea soup. “Do we have to eat this broth, like in Oliver Twist?” And they cackled with glee, all three of them, doubled up with helpless, ingenuous merriment.
It was a good joke, but I couldn’t laugh. It was just a bit too close to the bone to be funny. Like Caesar’s wife, it was important that I be not just above suspicion, but always appear to be above suspicion.
For me, it had been a transition from a professional to a domestic life. From recognition to anonymity. From a buzzing, frenetic, congested big city, to idyllic, laidback green spaces – a happy move. But it was also a move with which I had transformed myself from a successful and contented single parent to that dread mythical beast of yore, the feared and hated stereotype of scheming, evil manipulation and unfairness – a stepmother.
When people discover that Ekta and Veda (nobody would imagine the rhyming names to be coincidence) were born in the same year, one in May and the other in July – amazement, confusion and speculation follow, in quick succession.
No, it was not by Caesarean operation, as a first flight of lateral fancy sometimes leads them to deduce – nor, for that matter, a ridiculously long and protracted labour. “I know!” a gynaecologist’s eyes once lit up when trying to solve the mystery. “It’s super-fecundation!”
But of course it is nothing as esoteric as that. Ekta and Veda were born of separate parents. For more than half their lives they were not even aware of each other’s existence. Their childhood is linked not by blood but by fate. They share a room and toys and books, friends and lunch boxes, their dreams and nightmares; their inheritance and, to an extent, destiny. Their jeans too, although not their genes.
When I explain (which, very often, I don’t) there is embarrassment, and frequently generous, well meaning – but no less painful – attempts to view the whole affair from a liberal perspective. Somehow, being a stepmother never stopped being a social crime. I find it awkward to describe myself as one, participating in an ongoing crusade to soften the harsh images associated with the word. This includes writing letters to editors, requesting that they stop using the word ‘stepmotherly’ as a synonym for ‘unfair’. The letters are published, perhaps as a curiosity – or as an indulgence to a former colleague. But the usage persists.
A large part of the stepmother’s lot is the inner musings and assumptions of others. People love the drama of it. My two darling little stepkids had been left motherless at a tender age. Who could be blamed for watching covertly just in case I was marching determinedly into the deep woods with the little Hansel and Gretel in tow?
And who, on the other hand, could blame me for knowing that I was watched?
When I am tough and demanding with one child, it’s because as her mother, I expect the best from her. But if I treat the others the same way, am I just behaving in a candid stepmotherly fashion? Ostensibly well-meaning brandishing of the rod can so easily be a virtuous mask of the cruel mother – step or otherwise.
The internal evaluations are tougher and more demanding than those of others. I might behave (or intend to) in precisely the same way with all, but what about my private feelings? To what extent should my life become a ruthless drama of control and evaluation? What is the value of a healthy, natural, aggressive and potentially destructive reaction versus a polite and well-meaning but contrived one? 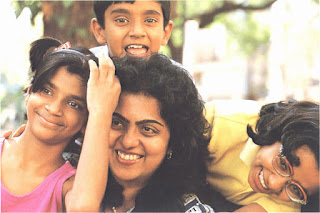 A favourite child may be one who possesses qualities which gratify you and is often the one who is said to resemble you the most. But resemblance can transcend genetics, as adoptive parents know only too well. When my son’s teacher casually informed me one day that he looked exactly like me, I was stunned with delight. All parents feel a certain satisfaction at having their offspring likened to them in terms of looks or behaviour, but stepparents are infinitely more sensitive to such unwitting praise.
Aman, blessed with a resilient personality and a wonderful instinct for humour, was young enough to have forgotten his tragic loss. Today, seven years after his natural mother died, he is a bouncing testimonial to my stepmotherly virtues with his spontaneous public demonstrations of affection and undying devotion. “Miss, miss, miss!” he had shouted, standing up in class, wanting everyone to know, “My father is getting a new mother!” Later, cuddling up one bedtime, he told me, “You are going to become our old mother!” I bristled, new in the relationship and self-consciously preferring to be myself rather than any unattainable vision of perfection. But he had only meant that as time passed, I would no longer be ‘new’.
But Ekta had been four and pined for her mother with a wild and inconsolable longing with which I could identify, but was helpless to confront and resolve. One evening she sat on my lap as we drove, crowded into the car, to a movie. “Mumma,” she whispered in my ear, snatching a private moment, a rare commodity in a family with three children, “Zara’s grandmother can speak to dead people!”
My blood ran cold. Less from the prospect of communicating with the dead than my glimpse of the forlorn hope this innocent little child still carried.
My instinctive response to raging sentimentality is to take refuge into practicality. “Oh well, that’s life!” is a philosophy that has saved my sanity on many occasions.
First appeared in Verve magazine First Quarter 1998
Posted by Saaz Aggarwal at 4:05 AM No comments: