At the gate of the Panna tiger reserve, our jeep driver confided that a tiger had killed an antelope and now lurked nearby. Just the previous day, he had driven in some foreign tourists and as the tiger gorged the remains, the tourists feasted their eyes. And two days ago, his jeepload had seen all of four tigers.
Until that point, I’d been sceptical. I grew up in an area replete with wild life. We drove through the nearby sanctuaries dozens of times and I never once saw a tiger in the raw. I had come to the philosophical conclusion that to see a tiger in a jungle, stepping haughtily through the undergrowth, was simply not in my scheme of things. But now there seemed new hope. 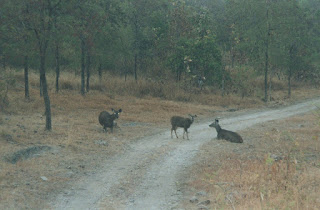 We drove through wild tracts of great beauty, ignoring acre upon acre of golden grassland that would have driven Van Gogh’s reapers green, intently scanning its deepest reserves for streaks of stripe. Every rustle in the thicket drew the jeep to a halt. The guide generously pointed out wild boar and sambhar, antelope and spotted deer, mongoose, langur and birds of every kind. We resented the lot, knowing that if they roamed free thus, no tiger lurked nearby. When he indicated a tree with massive claw marks running down its sides, all we could think of was Baloo skipping along, singing about the ‘bear necessities’ and carelessly outwitting Shere Khan.
We stood over the Ken River in a remote tree house restaurant, and it flowed gorgeously blue and shimmering in the morning light, rapids rippling over elegantly configured rocks, and dense thickets encroaching down to the water – but what was the use? There simply wasn’t any tiger, crouched on the banks, sipping of its bounty.
We stopped again at a picnic spot, with what was probably a stunning view of a slate-encircled gorge, and the guide leaned gallantly over the protective fence, shouting, “Hello! Hello!” to the resident echo and I pleaded, “Tiger! Tiger!” in the hope that someone would hear and do something.
Several bumpy hours later, all covered in fine clay-dust, we drove, dejected, towards the exit, musing bitterly that we hadn’t even seen tiger pug marks. (Everyone I know has come home having seen at least pug marks).
And then it happened. I gasped. A dim, majestic shape loomed in the distance, merging subtly with the trees in the forest light. My heart leapt with joy. But then my eyes focussed and it took form. How embarrassed I was to realize that this was only another sambhar. Tall and beautiful, wild and proud it was – but, for god’s sake, it was not a tiger.
From Panna to Pune is but a short syllable away and soon enough we were back in the big safari park in which we live. Dog committees congregate on street corners, yapping canine concerns deep into the night. As we drive along the road, herds of plodding water buffaloes amble, pendulous and ponderous, out in front of the car. It’s true that ‘Buffalo, buffalo, burning bright …’ doesn’t have quite that ring to it – but for the time being it’ll just have to do.
Fewer buffaloes are herded through Pune traffic in 2011 - though the bikers and motorists are just as unsightly and dangerous.
first appeared as a Times of India Middle on 17 Apr 2001
Posted by Saaz Aggarwal at 1:46 AM No comments: