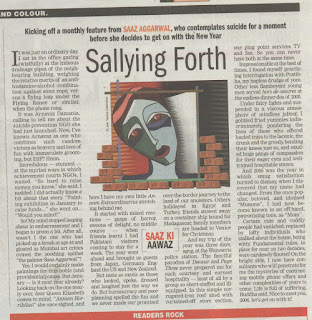 It was just an ordinary day. I sat in the office gazing (wistfully) at the hideous drainage pipes of the neighbouring building, weighing the relative merits of an antihistamine-alcohol combination against stout rope, versus a flying leap under the Flying Ranee or similar, when the phone rang. It was Arnavaz Damania, calling to tell me about the suicide-prevention NGO she had just launched.
Now I’ve known Arnavaz as one who combines such random virtues as bravery and love of fun with immaculate grooming, but ESP? Hmm.
Incredulous – stunned – at the myriad ways in which achievement courts fledgling NGOs, I waited. “So hard to raise money, you know,” she said. I nodded: I did actually know a bit about that story. “Painting exhibition in January to raise funds,” she went on. “Would you mind …”
So! My mind stopped leaping about in embarrassment and I began to preen a bit. After all, wasn’t I the one who had picked up a brush at age 44 and gloated as Mumbai art critics coined that soothing epithet “the painter Saaz Aggarwal”?
Yes, I would certainly make paintings for this noble (and providential) cause. But January - is it next year already? Looking back on the one nearly over, dear Queen Elizabeth comes to mind. “Annus Horribilus!” she once sighed, and here I have my own little Annus Extraordinarius stretching behind me.
It started with mixed reactions – gasps of horror, swoons of delight, no middle course – when friends learnt I had Pakistani visitors coming to stay for a week. The year then went ahead and brought us houseguests from Japan, Germany, England the U.S. and New Zealand – but none so exotic as those who looked, spoke, dressed and laughed just the way we do. Then bureaucracy and poor planning spoiled the fun and we never made our return over-the-border journey to the land of our ancestors.
Others holidayed in Egypt and Turkey, friends stowed away on a container ship bound for Madagascar, family members spent Christmas in Venice. And my trip of 2005 was 3 days, agog, at the Wanowari police station.
The fanciful parodies of Deewar and Page Three never prepared me for such courtesy and earnest hospitality – least of all by a group so short-staffed and ill-equipped. In this simple corrugated-iron roof shed with curtained-off store section, one plug point services TV and fan. So you can have one or the other, never both: Rwanda, not India (or Bihar, surely not Maharashtra). Impressionable at the best of times, I found myself practicing interrogation with Pratibha, my hapless drudge of yore.
Other less flamboyant young men served hors de oeuvres at the endless dinner-dos of 2005. Under fairy lights and suspended in a viscous atmosphere of mindless jabber, I gobbled fried yummies indiscriminately, pondering the lives of those who offered loaded trays to the laconic, the drunk and the greedy, bending their knees just so, and exuded huge pangs of compassion for the eager eyes and well-trained hospitable stance of Ravish’s boys.
And 2005 was the year in which smug satisfaction turned to dismay when I discovered that my name had changed. From the once popular, beloved, and idolized “Mumma” I had now become known in an off-hand, patronizing tone, as “Mom”. Certain cute and cuddly people had vanished, replaced by lofty individuals who stalked about the house, being witty like on television. Fundamental rules, in place for near on two decades, were carelessly flouted! On the bright side, I now have consultants who will penetrate for me the mysteries of contrasting mobile phone offers and other dread complexities of years to come.
Life is full of suffering, Buddha said. Nice to meet you, 2006, let’s get on with it.