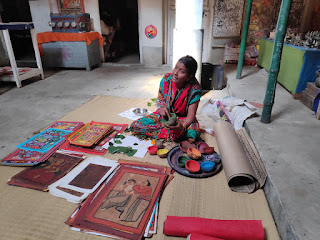 This is Rukshana, whose family belongs to a tribe of wandering minstrels.
Through the generations, they painted their stories and sang them aloud, showing their lovely scrolls to the audiences that gathered to look and listen as they walked from village to village, stopping to perform every now and again. As time passed, priorities changed. Television must have reduced their audiences significantly. The government of West Bengal settled them in villages, and the one we visited yesterday is Naya (Pingala), a 3-hour drive from Kolkata.
Rukshana showed us her family home, decorated with scrolls of her great-grandfather, paintings made by family members, and books and artefacts collected by her father Bahadur. She explained how they extracted colour from ordinary plants to make their paintings, and the techniques they use. 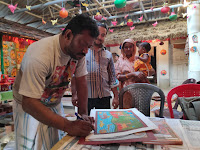 You can see Bahadur in the photo on the right, signing an exquisite work of the Sunderbans he had painted some time ago. This seems to be different from his earlier work, many of which are done in the Kalighat style and tell droll stories (in the photo above with Rukshana, the painting in front has a man standing behind a seated woman, helping her with her make-up and fixing a hairpin). These are not particularly connected to the Patachitra tradition which traditionally documents both stories of Hindu mythology as well as striking contemporary events. (A village wall  depicts the recent Pulwama incident, there's a photo later in this post).
This was our second visit to Village Naya. We had come two years ago, visiting visited homes and heard traditional songs. This one is the story of Radha-Krishna and you can see the children - even the baby who is not yet able to stand on her own - joining in the chorus.
We were tourists - but also sincere students, and had decided to return for another day that combined elements of a visit to a museum of rarities, an art workshop and an anthropology field-trip.
In 2017, it was Rukshana’s brother Rajesh who had shown us around. I asked Rukshana how come they had names which indicated that they followed different religions, and she explained that their tribe were Muslims. However, they painted Hindu stories and often performed for Hindu families. When those families expressed their discomfort that they were from another religion, they gave themselves Hindu names too. Nowadays, she explained, nobody bothered having two names, as Hindus and Muslims were just the same and she had only ever had the one name, Rukshana.

Posted by Saaz Aggarwal at 9:17 PM No comments: 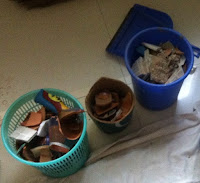 It’s such a good thing that my pot broke.
Now I don’t have to fill water any more. 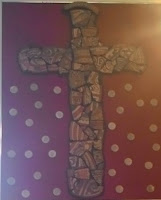 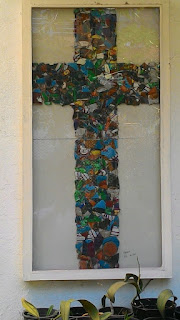 Once the Aggarwal Cross was ready, I started preparing to proudly display it in a prominent place outside the house.
However, the precocious author of the ‘matki phooti’ response now had another penetrating observation about these goings on: “It’s a good thing nani isn’t ever going to see this!”
Everyone turned various shades of pale. My mother, whose family had been displaced from their homeland – summarily exiled from their home province – by the events following the Partition of India in 1947 when she was a child, had always been a proud Hindu very sensitive to the slightest hint of religious conversion. What would she have felt about having such a large cross, no matter how pretty, outside our home?
In the end, my gorgeous cross was relegated to a place where nobody is ever going to see it. I myself hadn’t gone to worship at it for several months and now, looking at its bits and pieces am suffused with a sense of satisfaction. Partly for having turned from regret to creativity; partly for having produced a work of art; partly for the symbolic juxtaposition of broken bits, such as placing a worshipper right in its heart.
Posted by Saaz Aggarwal at 10:50 PM No comments: