How Shah Rukh Khan made himself 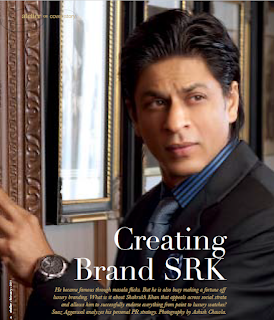 Shah Rukh Khan became famous through masala flicks. But he is also busy making a fortune off luxury branding. What is it about him that appeals across social strata and income groups to let him successfully endorse everything from pens to medium-budget cars to luxury watches? The evolution of this ordinary-looking man, from a middle-class family in Delhi and with no industry network, into the formidable Brand Shah Rukh, is not a happy accident but the result of clear, strategic thinking.
When Shah Rukh Khan’s first film was released in 1992, he was already a married man, and proud to be one. Unlike most other male Bollywood aspirants who suppressed information about their families with a view to projecting an irresistible romantic-hero persona, Shah Rukh Khan flaunted his.
Setting out with this novel approach, he maximised every opportunity that presented itself, and applied his keen business brain not just to advance his career but also to create a sterling public perception of himself that everyone, across socio-economic boundaries, could aspire to.
The first milestone was establishing himself as the embodiment of stability, cast-iron priorities, and traditional Indian family values. 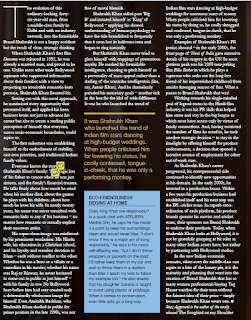 Everyone knows the story of Shah Rukh Khan’s family: the tragic loss of his father to cancer when he was just sixteen, and the family’s financial trauma. He talks freely about how much he cried when his mother died; about the games he plays with his children; about how much he loves his wife. In nearly twenty years, his name was never tarnished with romantic links to any of his heroines – no matter how romantic or sexually explicit their onscreen antics. His super-clean image was reinforced by his prominent secularism: his Hindu wife, his education in a Christian school, and his loyalty and seamless devotion to Islam – each without conflict to the other. Whether he was a hero or a villain or a comedian in his movies; whether his name was Raj or Rizwan; he never hesitated to come out in public as just himself – with his family in tow. No Bollywood hero before him had ever created such a determinedly wholesome image for himself. Even Amitabh Bachhan, who Shah Rukh Khan duelled in public for prime position in the late 1990s, was not free of moral blemish.
Shah Rukh Khan sidled past ‘Big B’ and instated himself as ‘King’ of Bollywood – applying his shrewd understanding of human psychology to have the title brandished so frequently that it soon lost its ludicrous tone and began to ring naturally.
But Shah Rukh Khan never tried to gloss himself with trappings of pretentious royalty. He masked his formidable intelligence, choosing to pitch himself as a personality of mass appeal rather than a darling of the wannabe intelligentsia (like, say, Aamir Khan). And he shamelessly paraded his monetary goals – another tick in the box for the idol of wish fulfilment. It was he who launched the trend of Indian film stars dancing at high-budget weddings for enormous sums of money. When people criticized him for lowering his status by doing so, he coolly shrugged and confessed, tongue-in-cheek, that he was only a performing monkey.
Examples of Shah Rukh Khan’s PR genius abound – in the early 2000s, the front page of Times of India gave extensive details of his surgery in the US! Its most glorious peak was his 2009 tear-jerking film Billu Barber in which he plays a superstar who seeks out the long-lost friend of his impoverished childhood from amidst thronging masses of fans. What a paean to Brand Shah Rukh that was!
Working towards his single-minded goal of legend-status in the Hindi film industry, it was his PR skills that helped him enter and stay in the big league to which most have access only by virtue of family connections. And, having restricted the number of films he acted in, he took another strategic decision – to stay in the limelight by offering himself for product endorsements, a decision that opened a lucrative avenue of employment for other out-of-work stars. 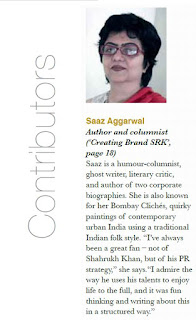 As Shah Rukh Khan’s career progressed, his entrepreneurial side continued to identify new opportunities in his domain. In the early 2000s, he invested in a production house. Within a few years his production business had established itself and his next step was the IPL cricket team. In superb cross-utilization of each platform, his product brands sponsor his movies and cricket team; their sponsors use Brand Shah Rukh to endorse their products. Today, when Shah Rukh Khan looks at Hollywood, it is not by gratefully grasping at bit roles as many other Indian actors have, but rather by partnering with Hollywood studios.
In the new Indian economic scenario, it is the maturity and planning that went into the creation of Brand Shah Rukh that has so many women professionals aspiring to buy Tag Hauer watches for their men without the faintest idea of their price – simply because Shah Rukh Khan wears one.

Posted by Saaz Aggarwal at 7:19 PM No comments: