and now, my daughter is visiting from Kolkata.
Someone from her office just phoned: 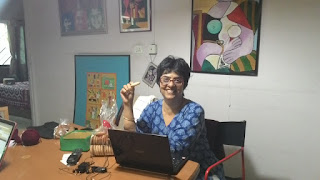 The restaurant was noisy with a group of students. Their teachers sat together at one table. All of us were enjoying the delicious Greek food. At first I thought they must be American but soon realised they weren’t speaking English – except to the waiter, another surprise. The students finished and trickled out and the teachers stayed on, finishing their wine and enjoying their dessert. I just had to know where they were from so got up and asked them and was intrigued to learn they were from Slovenia. Never met anyone from Slovenia before. I said we were going to Meteora tomorrow and they said, “Oh that’s a long drive, nearly three hours!” When I told them that for people who live in Pune, a three-hour drive is something you’re quite used to, they said if they got in a bus in three hours they would be at the other end of their country.
Well, the baklava came in with a candle and they stood up and sang Happy Birthday Dear Ajay – in Slovenian! It was wonderful, but I pressed the wrong button so it didn’t get recorded. Everyone came to wish him, including the manager’s cute little children.
We’ve had many special moments in Greece but this was one of the most special on this very special milestone birthday … HAPPY BIRTHDAY, AJAY!

Posted by Saaz Aggarwal at 4:11 AM No comments: