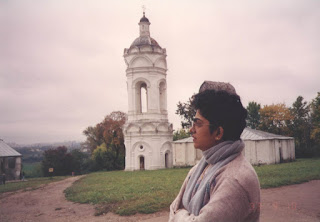 I enjoyed that stay in Moscow very much. I still had enough halting Russian to find my way around on my own. The metros were still as clean and organized as they had been before – relics of a more rigid era. A ticket to anywhere by metro or by bus was just ten roubles, a very small amount. Still, few passengers would buy one. I saw a ticket inspector patiently explaining to a woman who did not have one that she should have and that everyone was supposed to. Sadly, my stop came and I had to reluctantly get off without hearing the rest. But I doubt whether she was led before a firing squad to be shot, which may or may not have been the procedure in the old days.
parts of this first appeared in The Metropolis on Saturday 18-19 Dec 1993
Posted by Saaz Aggarwal at 2:33 AM No comments: