Last year, Gauri Gandhi called some Pune artists together to sit in Mandai, Pune’s historic vegetable market, and exhibit our wares along with the vendors there. The event went well and it was a great experience. 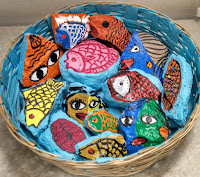 In January 2017, the Art Mandai Group participated in the Pune Biennale at Let Art Work Gallery, with the theme Gauri suggested: Merawala Blue. We worked on a piece each, in our particular shade of blue. I had a terrible time, and painted a series which turned out to look so unappealing that I was in despair. At the last minute I went fishing … and, repetitive but true … up came Today’s Catch. I was away, interviewing for Ability Foundation, and missed the launch of the show and a spectacular performance by the inimitable Ruve Narang who is not just a writer and painter but a dancer too. Just a few days later it was time for Art Mandai again.
Art Mandai has two main purposes: 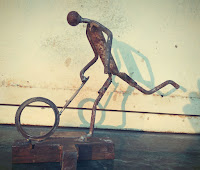 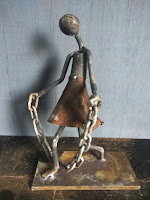 Ours is a diverse group, with painters, sculptors, ceramic artists, masters of large installation, graphic wizards and more. One of my most favourites is Prabhakar Singh, who works with pieces of scrap metal and turns out evocative, lifelike figures (such as the ones seen here to the left and right). 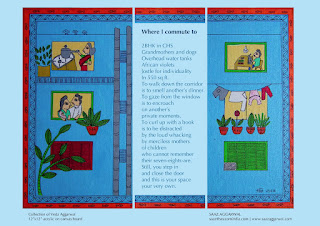 One principle the Art Mandai Group follows is low pricing, so this year one of my products was a series of limited-edition plastic placemats incorporating an image of previous work along with a poem written for it.
I realised later that this was the first time my art and my writing had come together. Until then they had been quite separate, with the process of naming the pieces as the only point of contact.
Posted by Saaz Aggarwal at 10:33 PM 1 comment:

Bear with me, read my vagina monologue


These days, private parts are going public in a big way. Apparently, Indian medical bodies are busy preparing workshops to teach surgical techniques that make female genitals 'aesthetically pleasing'. Apparently, hordes of women are lining up, urged on by ardent sexual partners. You can get glossy botoxed throat and cheeks, a nifty nose job, an uplifting boob job, tummy tucks, thigh trims and now fall off the assembly line with a cute ‘Barbie’ vagina. 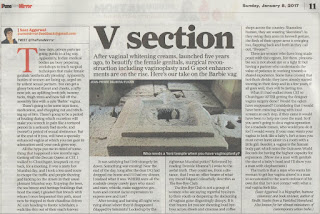 There’s going to be some injections, medication, and chopping out and stitching up of bits. There’s going to be a period of healing during which excretion will make you screech like a tortured person in a bad movie, and (worse!) a period of sexual abstinence. But at the end of it you will have a specially enhanced vagina at which you can gaze in admiration until your neck gives way.
All the hype put me in mind of something that happened a few months ago. Getting off the Deccan Queen at CST, I walked to Churchgate, knapsack on my back, for a meeting. It was a nasty hot Mumbai day, and I took a less-used route to escape the traffic and people shoving and kicking on the streets in their usual pleasant Mumbai way. Enjoying the trees, the sea breeze and heritage buildings that lined the road, I gloated that friends with whom I once frequented this path must now be trapped in their chauffeur-driven AC cars heading to frantic schedules; a walk like this out of their reach forever.
It was satisfying but I felt strangely let down. Something was missing! Near the end of the day, long after the dear DQ had dropped me home and I’d had my dinner, I realised what it was. WHERE were all the roadside creepy crawly guys who stand and stare, whistle, make suggestive gestures and contort facial expressions to express awe and lust?
After tossing and turning all night worrying about where they’d disappeared (Slapped by feminists? Locked up by the righteous Mumbai police? Reformed by reading Twinkle Khanna?) I woke to the awful truth. They could see, from a distance, that I was an office bearer of what my friend Falguni colourfully describes as The Bye-Bye Club.
The Bye-Bye Club is not a group of women who are saying regretful bye-byes to their youth or despairing the slackening of vaginas gone disgustingly droopy. It is that brazen lot you see shouting loud bye-byes across streets and cinemas and coffee shops across the country. Shameless hussies, they are wearing ‘sleeveless’! As they swing their arms in farewell gesture, the flesh of their upper arms is swinging too, flapping back and forth as they call out, “Byeeee!”
These are women who have long made peace with the orgasm. For them, pleasurable sex is not about size or a tight fit but having a partner who understands the value of patience in working towards a shared experience. Some have crossed that hot-flush divide; they have already started snoring in their sleep and in a few years, if all goes well, they will be farting too.
What if I had walked from CST to Churchgate AFTER getting the designer vagina surgery done? Would the oglers have reappeared? Considering that I would have been mincing along with loud screams at each step, if they came it would have been to help me cross the road. So if you aren’t going to do a vagina operation for a roadside romeo, who would you do it for? I would worry. If your man wants your vagina to look like a baby’s, he’s a man you must never leave alone in a room with a little girl. Besides, a vagina is the human body part which wins the Guinness world record for having the highest capacity for expansion. (Show me a man with genitals the size of a baby’s head and I’ll show you a man with elephantiasis.)
The truth is that a man who wants his woman to get her vagina altered is a man so accustomed to the warm embrace of his own fist that he’s lost contact with what a real vagina feels like.

First appeared in Pune Mirror 8 Jan 2017
Posted by Saaz Aggarwal at 1:23 AM No comments: