The sari that travelled from India to Pakistan

On Eid day, I was touched to read this facebook post by my friend Rumana Husain who lives in Karachi. She was dressed in a sari that had travelled quite a long way to get to her – but I had not realised until I saw her photo and read her post how special that made it to her.
In February 2015, my daughter and spent a few days in Kochi as guests of our friend Mathew Anthony. I spoke at a Rotary Club meeting and Veda performed a guitar concert at David Hall, an elegant venue in Fort Kochi. One evening, Mathew took us to Kalyan Silks and we decided to buy a traditional Kerala sari as a souvenir of the trip. Knowing Rumana’s love for saris with different local traditions, I bought one for her too. I took it home and put it in my cupboard, and every few days (and, as time passed, every few weeks) would wonder how I was going to get it across to her. At first I was waiting for a visitor from Pakistan who would agree to carry it for her. As the weeks turned into months, I began thinking of taking it with me when I next visited London and requesting a Pakistani friend there to get it sent across to Rumana.
In April 2016, as I packed for a trip to London, I realised that more than a year had passed since I bought the sari. I stook looking at it and wondered what to do. Karachi wasn’t that far away – how silly could I get! I made a parcel and on 11 April dispatched it to Rumana by Speedpost. The post office clerk said that the parcel would reach in two weeks and I felt happy, anticipating my friend’s surprise and pleasure when she received it. 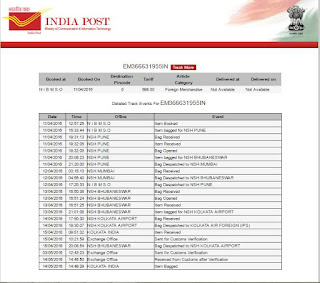 Two weeks passed and there was no word from her. Then another week, and then another. On 14 May, I telephoned Rumana to wish her Happy Birthday and could not stay silent about the sari any longer. I felt terrible hearing her thank-yous when there was nothing to show for it except the post office document which tracked the very interesting and circuitous journey her sari was on. It just did not make any sense to either of us. I kept thinking cynically that with the parcel having been opened so many times, the sari must have fallen out at some point and wandered off to another owner.
Rumana was visiting her son Adil in Singapore when the sari finally arrived at her home in Karachi on 1 June 2015. It was no longer important that it had taken so long, not even important that Rumana was not going to see it for another few weeks till she got home – the sari had reached! I was relieved. And a few weeks later, very moved to see her post and read what she wrote:


Eid Day! It called for wearing a very special sari. This sari was bought last year by my writer and artist friend Saaz Aggarwal in Kerala (she herself lives in Pune). It has a story, which you might find interesting: Saaz kept waiting for someone to carry it for me to Karachi but failed. Eventually she decided to parcel it. On May 14, my birthday, she called to wish me and asked if I had received the parcel. We were both upset to find that even after two months it had not reached me. She then went on a fact-finding mission of the lost saris of Kerala and Pondicherry (she has sent two) and learnt that the saris have had lives of their own! The parcel journeyed from Pune to Mumbai, then to Kolkata. It came back to Mumbai and then from Pune (or was it Mumbai?) it travelled to Karachi when I was in Singapore! Love this elegant sari, which I only saw on my return after a month. I decided to do some research about it and this is what I have found on the Internet. So come with me to this journey of the Kerala/Kasavu sari!
"Mundum Neriyathum (or its modernized version - Kasavu sari) can be traced back to the third century BC when Shraman tradition was spread all over Kerala. Shramanas followed a simple life style. They used to wear hand woven cotton which is yellowish off-white in colour. The tradition of golden coloured borders (Kasavu) along the Mundum Neriyathum might have been influenced by the Graeco-Roman "Palla" or Palmyrene. The Malabar coast had flourishing overseas trade with the Mediterranean world since antiquity. It should also be noted that traditional clothing of a region is closely associated with the local culture, climate and landscape. Mundum Neriyathum was well adapted to the tropical climate of Kerala. If you notice the traditional clothing all across the subcontinent, you can see that local people tend to wear clothes with colour contrasting to the landscape of that region. For example, the traditional colourful Rajasthani clothing match with the desert landscape of Rajasthan (same as our Tharparkar region); or the radiant traditional dress of Kashmiri women contrasting with the whitish landscape of Kashmir. Likewise, the off-white coloured Mundum Neriyathum contrasts well with the vivid landscape of Kerala."

Posted by Saaz Aggarwal at 7:15 PM No comments: