Once, some years ago, I wrote a poem about committing suicide. Despite the morbid theme, it aspired to be funny.
Sitting in a Bombay local train, a Local, I gazed blankly into space. It was off hours, so there was space to gaze blankly into. The train halted at a station, and my blank gaze fell onto the shine of steel rail under the window. It was a deep moment of truth, and the poem was conceived. There was a juxtaposition of two major themes. One was the history of blood and violence to which I had borne witness on more occasions than I like to remember. I had seen young men caught unawares as they jumped across the tracks in a hurry to get to the ‘Fast’ on the others side – and were hurled straight to that great Dombivali up in the sky instead. I had heard the awful wailing from the hutments that lined the other side of the tracks when yet another member of the tribe met his fate under the wheels of yet another speeding brown-and-yellow monster.
If the Locals were a powerful tool of death, why couldn’t they be manipulated for one’s personal convenience too?
The second was my own preoccupation with suicide, a preoccupation which sometimes worries me, but on other occasions (for example a few years ago when a book which listed practical methods of committing suicide stormed into the market and sold more copies worldwide than any other book in history, next only to the Bible) – I find reassuringly human and normal.
After all, isn’t suicide the ultimate weapon of control over one’s destiny, the only foolproof way of, to coin a phrase, saving one’s life permanently?
Although this poem was written several years ago, I only worked up the courage to have it published very recently. But back then, I gave it to Mukul Sharma to read. Mukul was at that time the editor of the erstwhile Science Today and I considered him a great benefactor, having published one of the very first pieces I ever wrote, along with my photograph. Although it was routine practice for Science Today to publish photographs of its contributors, at that time in my scheme of things, this was tantamount to having won the Booker Prize.
Mukul called me next day and returned it without saying anything. He reserved his comment for about six years, when I met him in Bangalore where he then lived. It was late at night and I had dropped in to say hello on my way to the airport.
“Do you remember that poem you once gave me to read,” he asked, “the one in which you tried to commit suicide? Did all that really happen?”
“No, of course not!” I guffawed.
“You had me worried there,” he went on.
I couldn’t understand how he could have imagined an autobiographical element in that poem, and told him so. He knew very well that I was particularly happy with life in those days, smugly considering myself successful and prosperous beyond belief.
“Well,” he justified his assumption, “look at Syliva Plath! She led a tortured life, and when she was happy and peaceful at last – that’s when she went and committed suicide.”
“Hmm,” I said, looking at my watch, “guess I’d better go and do it now.” We laughed, and I carried on to the airport, and have been taking it a day at a time since then. As you can see – it hasn’t happened yet.
first appeared as ‘Sweet side of suicide’ in Maharashtra Herald on 23 Nov 1997
Posted by Saaz Aggarwal at 8:16 PM No comments:

In 1982, Amita and I adopted the proven method of seeing the world by means of accommodating ourselves with friends-of-friends, their cousins, and so on. In Copenhagen, we stayed with my dentist’s neighbour’s daughter and her family – I promise I am not making this up.
In Germany, in a small town called Ludwigsburg, we found ourselves being graciously hosted by a family who had lived in south India for several years. Our first meal with them consisted, quite amazingly in those days, of dal, rice, mutton curry, pickles (as opposed to achar which is of north Indian denomination) and good old madrasi pappadams.
One evening they had a barbecue party for us but what was the use. None of their friends spoke English; between the two of us the only German words we had were weiner schnitzel, dummkopf, Lufthansa, blitz krieg and heil Hitler – which, for various reasons, we were unable to work into the conversation. Further we were social outcasts since we drank no wine for fear of what might happen next. Gabi, fiancée of the son of the family, made sincere attempts to chat with me. However, though she spoke in English, I could understand little of what she said. This was because she was hoping to discuss with me the works of J Krishnamurthy which she had studied in detail. Amita and I found ourselves in the kitchen, doing the washing up while the party carried on without us in the living room, where it had been shifted when it started raining.
From here we travelled north to Berlin and then Denmark (where my dentist’s neighbour’s daughter and her family looked after us very well indeed), and then south through Holland and Switzerland to Italy. After getting lost in Venice, losing money in Naples, and fending off some Romeos in Rome who sat on a broken wall outside the Forum, familiar to us from the Asterix comics, whistled at us and shouted, “Tum bahut sundar hai!” we arrived in Florence where we had several fascinating experiences.
The evening we arrived we hopped into a bus and confidently waited for the last stop, where we had been told the Youth Hostel was situated. Unfortunately, we had boarded the wrong bus. At the last stop, we asked the driver, by means of fantastic mime and gesture, the way to the Ostello. It soon dawned on him that he had on his hands a pair of pathetically stupid, if earnest, young foreign tourists. Heaving a longsuffering sigh, he turned off the lights in the bus, and drove us to the right spot.
For the two of us, habituated to the surly BEST drivers and their attempts to jiggle passengers violently back and forth and if possible actually hurl them onto the road by means of bucking and rearing the vehicle under their control, this was the most astonishing behaviour we could imagine.
Next day, Amita and I got into one of our frequent bitter fights and decided to spend the day separately – to my subsequent regret.
I had my eyes firmly fixed in the guide book wherever I went. She, on the other hand, had been looking around and, wonder of wonders, bumped into the one person in all of Florence we had any acquaintance with whatever – Gabi, who was spending a few months there workings as an au pair. And yes, Gabi even treated us to dinner; we had spaghetti (but no wine) in a little Italian bistro with red checked table cloths, and we all agreed that the world was a very small place indeed, and hoped that we would bump into each other many more times in the future. 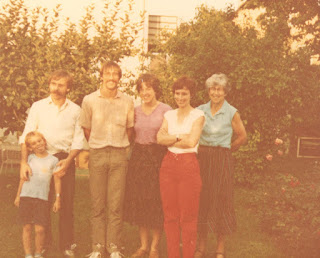 Both of us found Gabi a lovely person, and secretly agreed that she looked a lot like Princess Diana. In those days, all the fashionable young women were trying their best to look as beautiful and spectacular as the unfortunate princess, so of course it was beneath our dignity to say that we also found her extremely appealing and wished the very best of life to her. In fact, Amita and I had a special bond with Princess Diana, because we had all three been born in the same year. This was a bond I took seriously and even until very recently, when my children said to me, “That’s not fair!” I would tell them, “Yes, you’re right! Life is simply not fair! I was born in the same year as Princess Diana, she got the crown jewels and look at me, all I got was you.”
Now, for various reasons, that is a line I no longer use.
first appeared as Come on Gabi, let’s go party in Maharashtra Herald on 9 Nov 1997

Posted by Saaz Aggarwal at 2:39 AM No comments: