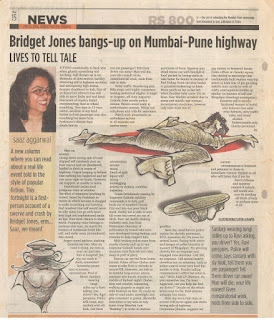 Sitting comfortably in back seat when ghastly screeching and lurching. Self thrown up in air. Moments of slow-motion lucidity observing self in highway accident and anticipating high drama. Scorpio shuddered to halt, 4 of us dazed but relieved that still able to move limbs and nod head. Foul scent of country liquor overpowering. Ravi at wheel trembling. First time in 15-year-career, accident of any kind. Father in front passenger seat also trembling but more from Parkinson’s disease than shock/horror.
Man on scooter racing down wrong side of road slapped self carelessly onto us. Ravi veered and car shuddered, landed in ditch in centre of highway. Urgent longing to believe that nothing has happened and we can carry right on home. However, car trapped, so unable to move.
Disembark! insists loud pompous voice at window.  Terrified of imminent lynching by crowd. Saved by flashback to movie in which heroine is dragged to stake screeching and howling. Had resolved that self would never be silly ninny but go with head held high and sophisticated smile on lips. Now have chance to show world. Pompous voice belongs to medium-size man, no match for woman of traditional build like self, and melts away (intimidated) into crowd.
Angry crowd gathers, shaking thunderous fists. Man on road is dying, put him in your car and take him to hospital! Yes, but car stuck in ditch, remember?
Scooterist prone next to scooter, unconscious. Pool of blood. Sardarji wearing lungi sidles up to Ravi asking, you driver? Yes, Ravi perspires. Police will come, says sardarji with sly look, tell them you are passenger! Tell them driver ran away! Man will die, your life ruined! Gives conspiratorial wink, nods from side to side.
Noisy traffic thundering past. Bike stops, and highly competent-looking individual alights. Is angel in disguise, off-duty inspector Galinde from nearby policy station. Waves crowd aside in authoritative manner. Whips out cell phone and calls for assistance.
Watch with amazement as ambulance arrives in ten minutes and carries away unconscious scooter rascal. Smell of spilt liquor still strong – bootlegging activity in vicinity, confides inspector.
Crane fortuitously passing by. Inspector Galinde stylishly commands it to halt, pull hook out of smashed Honda City and into our poor black steed. Daddy led to side to wait till crane has towed car out of ditch. Poor old daddy shaking violently now, less from Parkinson’s than fear of suffocation by crowd who have now developed loving feelings and clamour to help support him.
Mild-looking police team from nearby chowky pull up in van. Inspector Galinde hands over situation with flourish and rides away in puff of glory.
Rescue car arrived from home, hurrah. Police officer Chaher now wants to take Ravi to chowky to record FIR. However, am loth to let faithful long-tenure admin assistant into hands of police in middle of darkest night! Chaher, slow and reliable, reassuring, walking gingerly as might one with bunions on feet. Sit cosily on side of road under streetlight and give statement to police. Shrewdly remember to say was on way home from Mumbai (not “Bombay”) in order to impress personnel of force. Squeeze into small rescue car with box full of food packed by loving aunty to take home for family in manner of Red Riding Hood carrying basket to grandma balancing on knee. Moist patch on lap as last felt when dandled baby (now 19) on knee. Fear bladder accident due to stress and middle-age-woman-incontinence syndrome, however only raita from box of goodies.
Next day, send Ravi to police station for chowky procedure, RTO, insurance etc. No news for several hours. Pacing with worry and images of police brutality in manner of Bhagalpur. Try phoning chowky but no response and engaged tone alternate. Call 100, no response. Call several nearby chowkies but no solutions. Lady at police control room very kind but unable to help. Ponder calling commissioner’s office but what to say? “Hello Additional Commissioner Dhiware, do you remember me, I’m Saaz Aggarwal, can you help me find my driver?” Decide on the whole better wait for bit. Ravi returns unhappy but in tact.
Next day learn that man on scooter will never again ride down wrong side of highway. Corporator phones, suggests we pay money to bereaved family. Police officer at chowky agrees. Has yielded to stereotype that traditionally built woman wearing pearls in back seat of gas guzzling vehicle must surely be wife of crafty unscrupulous builder or similar (in manner of self and Bhagalpur blindings assumption). However self is merely hardened woman of world who believes that safer wear helmets, obey traffic rules, and avoid alcohol. Unfortunately only charity permitted by current circumstances is kindness and patience to those in immediate vicinity. Explain to all who will listen that if not for Ravi’s reflexes and superior control of vehicle, self would also now be needing all kinds of help or perhaps none at all.
first appeared as Bridget bangs-up on Mumbai-Pune highway, Lives to tell tale in Sunday Mid-day on 19 Feb 2006
Posted by Saaz Aggarwal at 1:56 AM No comments:

I’ve heard that women often go mad when their kids grow up and they have no one to yell at any more. Well to be honest I haven’t actually heard anything like this but I’m sure it’s pretty common. Here, for instance, is what happened to me as my youngest one’s 18th birthday hurtled towards us, giddy and relentless: I turned 80, and my arms suddenly became too short.
First the arms. For years I’d held book in hand while reading. Then one fateful day, with no warning, I found that my arms had shrunk. They were just too close to my face, the words were all fuzzy, and I simply couldn’t read.
As for the business of 80 – it was a rare and wonderful accomplishment. I’d hovered below this significant benchmark for months, waiting, anticipating, as does one for headlines about the Sensex.
Finally, one morning, Sensexily, I crossed the psychological barrier forever. I did attempt some teetering, shifting center of gravity from side to side, but the needle stayed firm, and there was nothing between me and the carpet but my bath towel and that would have been a horrid sight for the cleaning lady, so nothing for it but step off the scale and admit it. I was now in my 80s and that was that, might as well brazen it out and pretend that this was exactly what I had been intending, bring on the samosas please and I’ll just have another two (or six) jalebis while we’re here.
Out of the window forever went the pompously named General Motors, the degenerate sounding South Beach, the holier-than-thou Fit For Life, and the rest. The weak and puny were welcome to their gym schedules. I had more serious business - lying in bed with a book, flexing that rapidly shrinking arm into an enormous foil bag and rattling large handfuls into my mouth. Of course everyone knows that pretending thin women look better is nothing but low propaganda by men who want to keep all the food for themselves – of course.
And it so happens that, being a woman of remarkable substance with karma rapidly coming to fruition, I have endured monthly felonies – a drunk driver, a forged cheque, a jewellery heist, and finally, on the first day of the new year, a hacking crime that crippled my office for 3 days.
Poetic justice, some will mock: for years I bossily insisted that we work on the first of January, virtuously demanding that we begin with gusto and ambition rather than lolling about bleary eyed and hung over. Instead, we struggled and cursed and I finally headed off (never one to miss a chance of cozying shamelessly up to officials in high positions) to my dear friends the police where I learnt to my dismay that this was not really a cyber crime, which would have been a super notch on my belt of serial victim-hood, but merely the plain or garden variety of extortion.
Later, the 18th birthday came and went, with noisy celebration by friends of the concerned party, and weary cheer from the exhausted family. Weary for the years of turmoil past, and cheer at the sighting of a white dove, holding promise of a calm phase ahead. I renewed my commitment to the stitching group and hanging out with the girls, exchanging recipes and such. I even relinquished hold (a little) on the kitchen where my ISO 9001:2000 habits had caused hardened crooks (I mean cooks) to run shrieking in exasperation. To be frank, we were just a short step away from blaring instructions on megaphones and frog-marching miscreants into long shower rooms with tall chimneys, but now the winds have signaled change towards less troubled waters, about which more another time.
first appeared as Geriatricks! in Times of India, Pune on 10 Feb 2006
Posted by Saaz Aggarwal at 11:10 PM No comments: