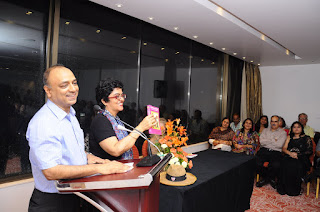 Posted by Saaz Aggarwal at 3:38 AM No comments: 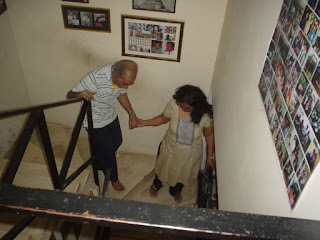 Once upon a time I fancied myself an intellectual, and put on airs and pretended, like so many others of my generation, to read Sartre, Joyce and others which today’s under-thirties would disdainfully dismiss as ‘books’. Then one day I noticed that weeks had slipped into months and years and all I’d done, day after day, was iron three even-sized but gradually expanding sets of school uniforms (and pajamas, and play clothes) fill three water bottles (and snack boxes, and lunch dabbas). Life blurred into a haze of endless bottles of white shoe polish, unit tests, twice-a-week home-baked chocolate cakes, lazy Saturday afternoon ice lollies and Disney movies, with nothing but some intermittent mommy violence to break the monotony.
It struck me that I might easily lay claim to the title of The Erma Bombeck of Pune. After all, we live in a city of pompous epithets – the self-important Oxford of the East that generates hordes of postgraduates who cannot distinguish an apostrophe from a garden spade.
A phase of adventure tourism began and life became a confusion of grave responsibilities and impossible commitments, with stress-induced ailments resulting in major surgery.  Meanwhile, grouchy bad temper had submitted to a sanctimonious streak and I’d become a Reiki Master.
Shouldn’t that be Reiki ‘Mistress’? my friend Amita frowned. But for various reasons I wasn’t that keen to be called a mistress – though now that I think about it, I’ve been called ‘Madam’ for long enough with great forbearance. People recognize me at forty paces – even on the telephone if you want to know the awful truth – as ‘Madam’, and I’ve learnt to live with it and keep smiling.  We’re a tiny and sadly marginalized community, us Madams, with our headaches and bridge mornings and afternoon naps, especially these days with attrition figures in the household-help industry marching ahead of the IT and even BPO sectors. Speaking on behalf of the Society of Highly Opinionated and Amply-endowed Madams (SHOAM), Maharashtra chapter, I encourage the government to set aside some kind of reservations for us too. In fact, if I was Chief Minister (and believe me, you could do worse) I would go right ahead and allot separate parking spaces for Madams whose drivers didn’t turn up for work that morning.
As CM, it would also be my pleasant duty to publicize the sensational, path-breaking research of an internationally reputed agency which intimately relates poor driving manners to sexual dysfunction. Men who broke through traffic lights were shown to suffer premature ejaculation. Road hogs who swerved, cut lanes, and shoved small fry out of the way were observed to have the most hilariously teeny-meeny wedding tackle. Those who used the cell phone while driving, the report elaborates, had been blatantly cuckolded many times over. And those who senselessly blared their horns were, naturally, those who leapt onto their beds with hope and anticipation but never managed to actually get horny.
Parts of this  appeared in Saaz ki Awaaz under the title Sallying Forth in Times of India, Pune on 13 Jan 2011
Posted by Saaz Aggarwal at 5:38 AM No comments: