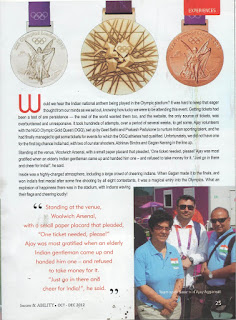 Another unforgettable moment was watching the quiet, unassuming Vijay Kumar work his way steadfastly through his event and come out nearly at the top. Every Indian inside the arena, including those in the media section, was jumping up and down and screaming with delight!
We were certainly disappointed that we never heard the Indian national anthem at the Olympics. At the same time, the thrill of seeing our beautiful flag raised a number of times made us come home quite determined that we would be there in Brazil too!
first appeared in Ability magazine OND 2012
Posted by Saaz Aggarwal at 5:29 AM No comments: