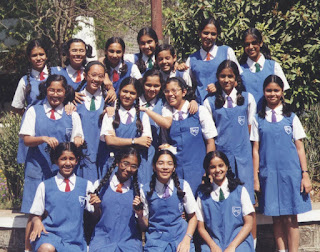 My tryst with Indian history is a peripheral circumstance of the ICSE examinations. This year my two darling daughters will battle for their lives in the all-important, career-defining, life-and-future-delineating event. So here I am, busy stroking heads to keep panic levels down, administering B-complex and iron tonics, and saying prayers. Besides, of what use is my 100 wpm typing speed if not to prepare long lists of mark-scoring objective questions for easy reference? As I dash them out, I’m swamped by images of the brave and visionary men and women who fought and died for our country.
My own grandfather would have been in the prime of youth at the time. But, with his family responsibilities and personal code of ethics, he was not one of those who quit his government job in hot-headed response to the Non-Cooperation Movement.
This was not a man I ever knew, since he had died when I was only a few days old, but I have a distinct impression of him as a uniformed, stern-looking person, from the black and white photograph on my father’s chest of drawers in days gone by.
And now, along with the images of our (glorious) freedom fighters – images dominated, to be perfectly frank, by scenes from Attenborough’s film Gandhi – I’m further burdened by multiple images of my father who is reduced to a quivering, diseased, inarticulate person, physically dependent on those around him. Images of my dad coolly smashing his opponent’s service, and winning the tennis match. Driving us across the country, singing at the wheel. Entertaining his goggle-eyed children with the great literature of the world  before we had learnt to read. Today he’s ill and helpless, and we with our frantic lives can spare him no more than infrastructure comforts, hurried hellos, and perhaps a few useless, sentimental tears late at night when everyone else is asleep and the cares of office, kitchen, and exams, are briefly on hold. Back during the freedom struggle, he would have been a boy playing football, reciting Elegy in a Country Courtyard for the school elocution, getting whacked for the mischief his naughty sister had run away from. When Lala Lajpat Rai died, he wasn’t even born yet. Today, Sher-e-Punjab is the name of the restaurant on every street corner. And life goes on.
First appeared as ‘Down memory lane’ in a Times of India Middle on 25 Mar 2002
Posted by Saaz Aggarwal at 9:35 AM

Email ThisBlogThis!Share to TwitterShare to FacebookShare to Pinterest
Labels: Middle