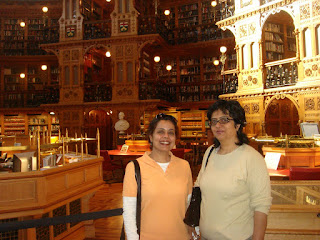 Our weekend visit to Ottawa, Canada’s capital, happened to be on Doors Open, a day on which public buildings welcome visitors. So we dropped by at the Supreme Court, Houses of Parliament, and even the Governor General’s home. Security arrangements were in place but there was no trace of paranoia or hatred. This complete lack of fear was for me the most refreshing aspect of this country, and doubtless a consequence of the thanks-to-big-brother-you-can’t-see-me syndrome. The streets of Ottawa are wide and clean. Coming from a land of teeming millions, there arose within me a very loud question, namely: “Where IS everybody?” which made Smita laugh. Toronto by contrast can get crowded – but I found it a relaxed place with the screaming inner-city adrenalin absent.
On our last day we drove out to Niagara Falls where we enjoyed looking across the gorge and gloating at those standing on the American side, peering over but unable quite to see all that we could. As we headed home, Smita’s formidable, internationally-acknowledged organizational ability had two rainbows arranging themselves over the falls, and we rode into a magnificent pink-and-purple Toronto sunset, Lake Ontario rolling alongside, and the deep-throated Canadian genius Leonard Cohen belting out his soulful ballads all the way home.
parts of this first appeared as Steeped in a maple world in Sunday Mid-day on 6 Sep 2009
Posted by Saaz Aggarwal at 3:46 AM