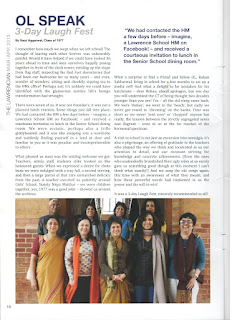 I remember how much we wept when we left school! The thought of leaving each other forever was unbearably painful. Would it have helped if we could have looked 36 years ahead in time and seen ourselves happily posing together in front of the clock tower, striding up the slope from flag staff, inspecting the Red Fort dormitories that had been our bedrooms for so many years – and even, wonder of wonders, sitting and cheekily sipping tea in the HMs office? Perhaps not; it’s unlikely we could have identified with the glamorous aunties life’s benign transformation had wrought.
There were seven of us. It was not Founders, it was not a planned batch reunion. Some things just fall into place. We had contacted the HM a few days before – imagine, a Lawrence School HM on facebook! – and received a courteous invitation to lunch in the Senior School dining room. We were ecstatic, perhaps also a trifle giddyheaded, and it was like stepping into a wardrobe and suddenly finding yourself in a land as dear and familiar to you as it was peculiar and incomprehensible to others.
What pleased us most was the smiling welcome we got. Teachers, admin staff, students alike treated us like honoured guests. When we expressed a desire for chota buns we were indulged with a tray full, a second serving, and then a large parcel of that rare unmatched delicacy from the past. A teacher escorted us patiently around Girls’ School. Stately Nithya – we were children together, yes, 1977 was a good year – showed us around the archives.
What a surprise to find a friend and fellow OL, Rohan Sabharwal, living in school for a few months to set up a media cell! And what a delight to be mistaken for his batchmate – dear Rohan, abject apologies, but one day you will understand the CT of being thought two decades younger than you are! Yes – all the old slang came back. We were ‘dames’, we went to the ‘beach’, but sadly we never got round to ‘chroming’ on the banks. Time was short so we never ‘sent over’ or ‘chopped’ anyone but really, the tension between the strictly segregated sexes was flagrant – even to us at the far end of the hormonal spectrum. 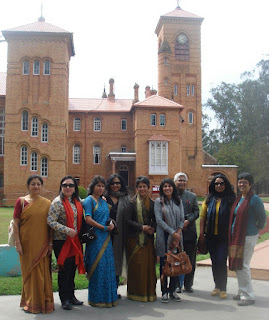 A visit to school is not just an excursion into nostalgia, it’s also a pilgrimage, an offering of gratitude to the teachers who shaped the way we think and inculcated in us our attention to detail, and our constant striving for knowledge and concrete achievement. (Even the ones who unabashedly brandished their ugly sides at us surely gave us something good though at this moment I can’t think what exactly!) And we sang the old songs again, this time with an awareness of what they meant, and how these powerful words had implanted in us the power and the will to win! It was a 3-day Laugh Fest sincerely recommended to all.
first appeared in The Lawrencian Mar-Apr 2013
Posted by Saaz Aggarwal at 3:36 AM

Email ThisBlogThis!Share to TwitterShare to FacebookShare to Pinterest
Labels: Travel