Santiago is a city of parks, water-bodies, sculptures, churches, and a marked European influence. The homes I visited were in stylish and comfortable high-rise buildings. However, even those districts of the city in which the underprivileged live are clean and well-maintained, with sturdy buildings constructed to withstand the frequent earthquakes. Europe recedes and Latin America emerges in street upon street of two-storey houses vibrant with graffiti murals. Santiago, with its arty metro railway and giant supermarkets is still a city whose petrol pumps and parking lots have attendants.
With the Andes hovering protectively over Chile, Santiago sits in a valley surrounded by low snow-peaked mountains. It’s a beautiful backdrop – but one which makes it highly polluted. In winter, the city waits anxiously for rain to relieve its smog. The day I was leaving, a pollution crisis was announced. Forty percent of the city’s cars were kept off the roads and schools cancelled sports and physical education classes. 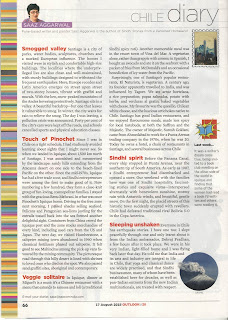 I was in Chile with a tight interview schedule, and had studiously avoided learning about sights that I might never see. So when we landed in Iquique, about 1500km north of Santiago, I was astonished and mesmerised by the landscape: sandy hills extending from the Atacama Desert on one side and the beach-lined Pacific on the other.
Since the mid-1970s, Iquique has had a zone for free trade, and Sindhi entrepreneurs were among the first to make use of the opportunity. Now numbering a few hundred, they form a close-knit group of fun-loving cosmopolitan families. I stayed with the gracious Renu Melwani, in what was once Pinochet’s Iquique home.
Driving to the free zone next morning, I passed shacks selling varieties of fish and shellfish. Pelicans and Patagonian sea lions, jostling for the entrails tossed back into the sea, formed another unexpected and delightful sight. Containers from China crowd the Iquique port and the zone stocks merchandise of every kind, including used cars from the US and Japan. Next day we visited Humberstone, a saltpetre mining town abandoned in 1960 when chemical fertilisers phased out saltpetre. The area is also rich in copper and Chile is the world’s largest exporter. Among the pervasive pick-up vans of the mining community it felt good to see Mahindras. The picturesque road through this hilly desert is lined with roadside shrines commemorating loved ones who died on the spot. We also passed sand graffiti sites, aboriginal and contemporary.

In Iquique, dinner at Miguel’s is a must: it’s a Chinese restaurant with a menu that extends to samosa and loli (traditional Sindhi spicy roti). Another memorable meal was in the resort town of Viña del Mar. A vegetarian alone, rather than grapple with a menu in Spanish, I bought an avocado and ate it on the seafront with a packet of fries from McDonald’s and an occasional benediction of icy water from the Pacific.
Surprisingly, one of Santiago’s popular restaurants, El Naturista, is vegetarian. A century ago, its founder apparently travelled to India, and was influenced by Tagore. We ate Arroz Hortelana, a rice preparation; Papas Salteadas, potato with herbs; and Verduras al Gratin, baked vegetables with cheese. My favourite was the quesillo, Chilean white cheese, and the luscious artichokes native to Chile.
Santiago has good Indian restaurants, and we enjoyed flavoursome meals, with chilly reduced for local tastebuds, at both Saffron and Majestic. The owner of Majestic, Suresh Goklani, came from Ahmedabad to work for a Punta Arenas trading company when he was 20, in the 1970s. Today he owns a hotel, a chain of restaurants in Santiago, and several businesses across Chile.


End of the world

Before the Panama Canal, every ship stopped in Punta Arenas, near the southern tip of South America. As early as 1907, a Sindhi entrepreneur had disembarked and opened a store. Our weekend with the families here was one of Sindhi hospitality, fascinating stories and exquisite vistas – interspersed alternately with benevolent sunshine, stormy rain with Antarctic winds, and beautiful, gentle snow. On the first night, the placid streets of this historic town suddenly erupted with revellers. Chile had defeated traditional rival Bolivia 5-0 in the Copa America.

Everyone in Chile has earthquake stories. I have one too: I slept peacefully and only learnt about it from the Indian ambassador, Debraj Pradhan, a few hours after it took place. We were in his very Indian, light-filled home and I was flying back later that day. He told me that India and its arts and industry are integral to life in Chile, that yoga and classical dance are widely practiced, and that the Sindhi businessmen established for decades, as well as pan-Indian entrants from the new Indian multinationals, are treated with respect and warmth, and lead comfortable lives. Interesting to know this about a country so far from India that if you tried to go any further you would be on your way back. 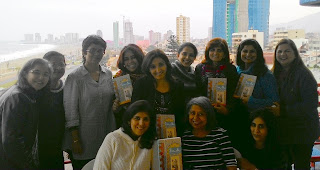 It was a writer’s dream, being invited to a book club meeting on the other side of the world in an exotic place called Iquique and finding that some of the women had read a book I’d written and others were reading it.
The view from this balcony, in the house where Pinochet once lived, is coastline on one side and stark desert mountains on the other. 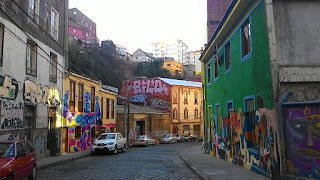 As a young child, I lived in a place from which the closest town was Valparai, Tamil Nadu. It was a special highlight of this visit to spend a few hours in stunningly beautiful Valparaiso, Chile, once one of South America’s major ports and today a UNESCO heritage site. The sea, the heritage buildings near the port, stacks of brightly coloured huts on the hillside - and the most striking street graffitti. Of course I will have to go back for more.
There was an 11-hour transit in Paris on the way home. At the end of the aerobridge leading out of the plane stood three burly, stern-looking policemen primed to catch all the Santiago thieves trying to enter their lovely city. “Where are you going?” one of them barked at me with hatred. “Mumbai,” I replied, surprised. By then, leafing through my passport he had found, to his horror, a Schengen visa that entitled me to enter Spain on 2 July – nearly two weeks later! In renewed anger and disgust he shouted again, “Where are you going?”
Ahhhhh …. India, India!
Parts of this appeared in Outlook magazine in the 17 August 2015 issue.
Posted by Saaz Aggarwal at 11:00 AM