My teachers and role models 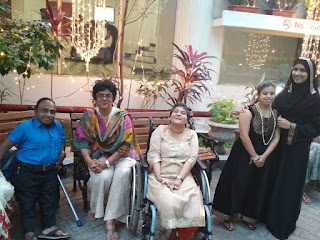 My most favourite part of December every year is when I get to meet people who have been nominated for the CavinKare Ability Awards. And last night I was privileged to be there when some of them received the award. In the wheelchair you can see beautiful and vivacious Jasmina Khanna. She has cerebral palsy, and works in a responsible position in a multinational company, a valuable member of her team. (Incidentally, in her SSC examination Jasmina scored 100% in Mathematics!)
Next to her is the charming Gauri Gadgil. 27-year-old Gauri has Down’s Syndrome but she’s a Bharatnatyam dancer, a swimmer who has won medals for India in international sports events and the heroine of The Movie Yellow, a Marathi film that won awards and was a commercial success too. 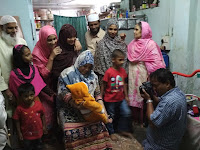 Next to Gauri is Dr Roshan Shaikh. Roshan was sixteen when she fell out of a Mumbai local train and had to have her legs amputated. With family support, this daughter of a vegetable vendor got right back to her studies and completed XI Std without even losing a year. And she went on to study medicine at Kem Hospital, after fighting a court case to overturn a government refusal to give her a seat in a medical college because of her disability. Roshan completed her MBBS and internship and is now preparing for admission to post-graduation – and is prepared to deal with any government restriction that might come in the way ... this beautiful, kind and brave woman is going to be a surgeon. 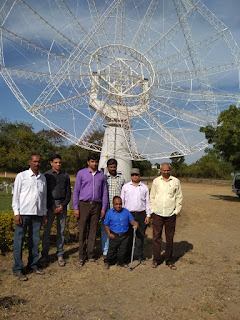 Sitting on my left in the photo above is Raju Uprade, one of the most extraordinary people I've ever met. Raju, with congenital deformities and from a low-income family, completed his BE in Information Technology on a scholarship and after a long and continuous battle for employment, facing discrimination and mockery all the way, is now a key member of the international ‘Square Kilometre Array’ project hosted by Tata Institute of Fundamental Research (TIFR). When Manoj Muthuveedan and I visited, he showed us around his workplace – introduced us to his colleagues who are all so proud and admiring of him – arranged lunch for us at the canteen and later made chai for us at his home. Raju, despite the challenges, lives on his own.
When Raju came on stage to receive his award, he dedicated it to his mother without whom, as he said, he could never have overcome his physical limitations. Raju spoke very simply and objectively, but facing the stark truth that a disabled child in India is usually considered a burden and so rarely given the nurturing to develop individual abilities, many in the audience were in tears. After all, Raju is not just a scientist and IT whiz, he is a poet too as you can see from his blog.
While Jasmina, Gauri, Roshan and Raju received the CavinKare Ability Mastery Award, the CavinKare Ability Eminence Award went to Mahantesh Kivadasannavar. 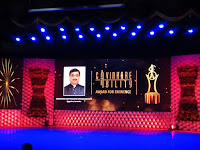 Mahantesh was born in village Neginval, 40km from Belgaum. At 6 months he contracted typhoid which affected his optic nerve and retina. His father worked for Department of Agriculture and had a transferrable job.
Mahantesh was admitted in Shree Ramana Maharishi Academy for the Blind in Bangalore when he was ten . The school had a tradition of having an older boy take care of a younger one. Nagesh, three years older, looked after Mahanatesh like an elder brother. Together they played a lot of cricket, broke many glasses. They stayed in touch as Mahantesh continued his education first at National College, Bangalore and then Bangalore University, finishing with an MA in 1994 and MPhil in 1996 in English Literature. He began teaching at University Law College but discontinued when Samarthanam began to take more and more time. Nagesh and Mahantesh registered Samarthanam in 1997 in Bangalore, with the desire to create a better world for future generations. They stayed up late at night discussing their dreams and making plans. The seed money came from the University Grants Commission Junior Research Scholarship from which he received Rs50,000 per year to study. Mahantesh’s father paid for his studies, telling him to use the money for something he wanted to do. Mahantesh also received an LPG distributorship and this gave some income.
Today, Samarthanam is like a corporate group, with a large number of diverse interests, each purposefully run with its own team and resources. We had one day, and saw just part of it, and it was a tremendous experience – amazing to think it was started by two blind men, not yet 30 years old, in 1997.
Mahantesh and Nagesh formed an exceptionally good team and complemented each other: while Mahantesh was a dreamer and visionary, Nagesh would execute swiftly and excellently. This mirrored their disability: Mahantesh has a mild long-distance vision while Nagesh could see up close, “So we could walk any terrain together. I miss him every day.” Sadly, Nagesh succumbed to a heart attack in 2016. He was 49 years old.
Some of the most striking features of Samarthanam are ...
Diversity: the organization has so many different sides to it and these include cricket for the blind; education; rehabilitation, skilling, placement; creating awareness; events (cricket is one of the most prominent but there are annual Walkathons and other public events); promoting employment of disabled; care of mentally challenged as well as care of women who have suffered violence; food for children in government schools; an eco project, Parisara, which supplements the government efforts in Bangalore; cultural expression for the disabled in art and dance.
Scale: the number of people who have been impacted is huge; Samarthanam is growing at a rate of nearly 40% every year, adding new divisions and increasing old ones. It has also grown and replicated its model across India and registered non-profit organizations in the UK and USA.
Partnerships: Samarthanam started with a group of volunteers. As the organization grew, they took on paid professionals to work. Today the main reason for Samarthanam’s continuous expansion is the effective use of partnerships with large bodies including corporate organizations, other NGOs and the government and its various entities.

One of the most presently visible contributions by Mahantesh is promoting and streamlining blind cricket. India is a nation crazy about cricket, why should the visually impaired be left out? Mahantesh, a cricketer himself, played in school and encouraged others to play. In 1996, one year before Samarthanam was registered, he was one of the Indian Cricket team for the Blind who toured England. He later served as coach of the team. In 2010, Cricket Association for the Blind in India (CABI) was registered, with Nagesh as founder president and Mahantesh as founder secretary. This has been a spectacular way to showcase the abilities of the visually impaired. When India began winning international cricket championships, the country sat up and watched.
We visited the Gopalan Sports Academy where a camp was being held to prepare the 17 players selected from all over India for the national team. Next month they will play the fifth edition of the one-day international world cup in Pakistan and Dubai, and the participating countries are India, Pakistan, Sri Lanka, Bangladesh, Nepal and Australia. Captain Ajay Reddy told us about how his team defeated Pakistan in the world cup finals – a spectacular victory since till then Pakistan had been a fearsome foe! And it was a victory which so moved India that the Prime Minister has twice invited and personally felicitated the team and spoken about it in his Man ki Baat. Not only that, but ex-captain Shekhar Naik was awarded Padamshri.
The team, comprising visually impaired boys from rural India, are no longer relegated to being shoved aside, the fortunate ones set to weaving cane baskets to earn a living. They are performing brilliantly in public, and have grown in ability and self-esteem. They can speak with confidence and they are getting jobs and promotions.
All this is the result of considerable time and effort invested by Samarthanam in registering first the national body and then 24 state bodies and working to promote the concept with blinds schools and institutes, arrange matches at the local, then state and then national levels, create tiers and keep expanding. 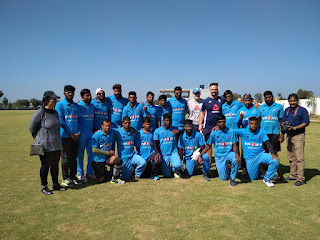 Ross Hunter, head coach of the England visually impaired cricket team was on the ground when Manoj Muthuveedan and I visited and he told us that he had been invited by Mahantesh to share best practices. While I assumed that he was visiting as a trainer, he told us that he was visiting "to learn what makes Indian blind cricketers the best in the world." He also told us that when he brought his team to play in Indore, they played in a stadium with 20,000 spectators, something they could never have in England and he is immeasurably grateful to Mahantesh for that. 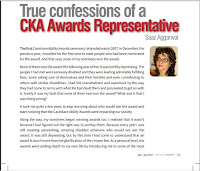 Though delighted for those who received the award, I also felt disappointed, as I have done for each of these 11 years I've volunteered with Ability Foundation, for those wonderful, brave and brilliant people I met who did not get it.
India has close to 100 million people of disability and these role models will lead the way to bring them out into the mainstream. 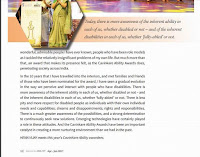 Posted by Saaz Aggarwal at 9:23 AM

Email ThisBlogThis!Share to TwitterShare to FacebookShare to Pinterest
Labels: Ability