The Awful Truth About Pocha-Pani

Lockdown, being unable to leave the house or to have anyone visit, meant that housework had to be done by the inhabitants. Three of us shared the duties and it was a great relief that it proceeded with no bickering and high standards of not just F&B but housekeeping too. In the early days I even wrote an appreciative poem which if you like you can read here.
It reminded me of an earlier phase - more than twenty years ago, and a column I wrote for Times of India, Pune:
As I write this, I can see a broom standing in a corner, gazing reproachfully at me, and I am pitting all my wits towards repulsing it. What nerve – the repulsive creature! Brooms, I grew up with the firm knowledge, had only one sensible function: to be ridden on.
And I’ve ridden a great many in my time, and even now, in my days of peace and plenty, sneak out on occasion at the dead of night, clamber onto my trusty long-handled steed, and take the long flight past the full moon. In metaphor, that is, dear reader – only in metaphor.
But this one here, standing in the corner, continuing to glower and distract me from my elevated mission, has clearly forgotten its humble station in life. The cheek! Under the influence of its sulky stare, I have no recourse but to look around and painfully acknowledge the presence of assorted cobwebs and filthy little grey curlicues in the corners, the curlicues being also known, by my vocabulary-impoverished and totally obnoxious offspring, as “yucky black-black things” with the recommended usage: “Mumm-aa, why there are so many yucky black-black things in our house? In Zara’s house there are no yucky black-black things only.”
Not only did I come back from my holiday in serious need of a rest, not only did I pay for it before I left in extravagant wads of time, energy and units of currency, but I’ve come back to find that I still have to pay more, and further do all the unpacking, cleaning up and sorting out on my own because the housemaids, foolish wenches, have unanimously departed.
Once upon a time, long, long ago, Ma Sadhana came to my house to interview me for an article for the Osho Times on women and creativity. I was up to my knees in pocha-pani then too, having been devoid of the blessed and soothing presence of any Household Help for several months and I held forth at length on what a wonderful opportunity I was having to learn how to clean the toilets, make chappatis and so on. An opportunity I had never had in the past (and, I hoped, but didn’t add, I would never have in the future) and was therefore making the most of. And this, I waxed eloquent before Sadhana, was a situation which had scope for such tremendous creativity! What I really, really enjoyed, I went on, was being creative in private! Creativity, I ended with a flourish, was not something that needed applause to be classified as creativity! (I meant it, I swear I did.) And when the article appeared, alongside a photograph of myself so glamorous that none of my numerous friends, relations or acquaintances could recognize who it was, I gloated, congratulated myself for weeks without end, and sent copies to the entire lot of them. Most, unfortunately, were grossly under-equipped to tackle Sadhana’s exquisite Hindi prose but I can tell you they were, one and all, awed and impressed by the whole affair. 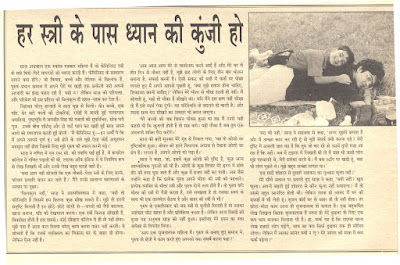 Sensing that I was on to a good thing, I wrote an article about how virtuous I was and how much I loved housework, and how I just couldn’t understand why most women made such a big fuss about it. It was such a brilliant and well-written article, with such a clever and original theme, and I sent it off to a friend who happened to be editor of a popular women’s magazine at the time. I’ve never been able to understand why she indignantly sent it right back, declaring it unfit for publication.
But meanwhile, talking about pocha-pani, here I have yet another large and smelly bucket filled with the stuff and I’m looking around wondering, wondering and wondering, what on earth am I going to do with it?
Do I flush the exotic cocktail down the toilet? Because I’m not much looking forward to cleaning that indispensable commodity (commode-ditty, get it? – hah!) either. Do I throw it in the garden and risk murdering my beloved husband’s beloved plants with the fenyle and other vile ingredients it contains? Or shall I pour the delectable gravy (floating richly with strands of lustrous – luxuriant, even, if modesty will permit me – black, coconut-oil lavished hair) in the sink, and airily leave the choking which is bound to result, to be dealt with on another day?
All the long years I have employed other humans to clean my home on my behalf, what on earth they did with the pocha-pani has remained to me one of the great mysteries of life.
I go through phases of keenly scouring the Handy Hints sections of newspapers and magazine for likely answers, but it is a topic coldly neglected by one and all. I can’t imagine why.


A little history about where and when this first appeared

While crediting Times of India, Pune, for having published the above article on 30 August 1997, I need to clarify that in those days TOI did not have a full-fledged Pune edition. The article was actually published in a supplement called Pune Times, which accompanied the Times of India, Mumbai, in those days. When I moved to Pune in 1993, the good people of Pune were still making doing with the TOI’s Mumbai edition. In fact, TOI was new in Pune and the most popular paper then was Maharashtra Herald, with Indian Express selected by readers who wanted to feel more connected nationally. When my editor at TOI Mumbai, Darryl D’Monte, heard that it was the Express that was being read in my home, he gave me such a reproachful look that we promptly shifted to the TOI. Over the years, a very large population of Pune did so too and of course Darryl, in his editorial capacity was responsible for that too.
But, back in 1993, it was very flattering for me to have the managers of TOI, Pune, T. Ninan and Winston Machado, periodically phone to tell me that they were planning a TOI Pune edition and wanted me on board as editor.
‘Phone’ reminds me of the six-digit numbers we had back then; we'd migrate from 671261 to 26851261 over the years as the exchange modernized. The number remains even today, but BSNL lines are so bad that it is seldom used.
Anyway: Ninan and Machado and whoever else was making decisions in those days had no idea that I was not the right person for this job. Ascent, which I had launched for the TOI in Bombay in 1990, was a huge success IN SPITE of rather than because of me. They may not have known this, but I certainly did, and politely declined all their seductive offers.
Eventually, Sherna Gandhy moved from Bombay and launched the Pune edition of TOI and ran it for a few years. It began as Pune Times, a supplement to the Mumbai paper. After the main newspaper began in Pune, Pune Times gradually evolved into a paid-news platform for individuals and organization seeking publicity, and I’m afraid I’d rather just say that this pocha-pani saga, one of my favourites ever, was written for Times of India, Pune.
Posted by Saaz Aggarwal at 8:06 PM