Robo Langda awoke slowly.
The doorbell had been ringing insistently for several minutes. He cursed silently and groped his way to the entrance of his apartment, forcing his eyelids painfully apart. That pesky sadistic newspaper boy did it every Sunday morning. 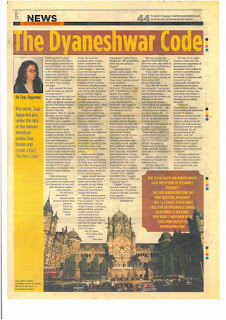 Robo opened the door with the chain on, and felt the large wad of newspapers thrust right into his gut. Coffee, he needed coffee. He tipped a generous shower of Brazilian instant into a mug of water and shoved it into the microwave. Then he saw the headline, and he reeled.
Castrating the ouch! it read. Langda’s breath came in slow, painful gasps. The famous communist poet Jacob Sussanna was no more. Langda, professor in History at the , had read Sussanna in Femina and other esteemed magazines ever since he was a student. Sussanna had a brilliant mind, and was well known to be a storehouse of cultural knowledge. Vastly respected for his wit and wisdom, Susanna was a darling of the TV news channels and regularly held forth on various debate shows.
Fully awake now, Langda peered at the extraordinary headline and the photograph of one well-built Inspector Jadhav, arms akimbo. According to the article, Sussanna had phoned Jadhav bare seconds before he died of a massive heart attack. He had been sounding rather strange – Jadhav confirmed that Sussanna often sounded rather strange – and had requested the Inspector to come and see him immediately though it was the middle of the night. Indulgent of the eccentric behaviour of brilliant poets, Jadhav had rushed to his side, but too late. Sussanna lay on the floor, tightly clutching a note in his hand on which was hand-written, in bold capital letters, “Castrating the ouch”. What could it possibly mean?
“Inspector Jadhav is certain that Sophie-Kutty, famous Sudoku champion and granddaughter of Susanna, will have a solution to this mystery,” the article concluded.
Langda, who had an earnest face and kind heart, was romantically unattached. He thought for a moment, then pulled on his trousers, splashed some water on his face, and walked down to the Bandra station.
Soon enough, Sophie-Kutty appeared, and Langda, cunningly looking the other way, stuck his leg out so that she tripped over it. As he helped her up, they held each other’s hands for a brief, warm moment.
Sophie herself was not that bad looking and had small, well-formed (but extremely strong) bones.
“I’m so sorry to hear about your grandfather,” Langda said gently.
“He was trying to warn me,” Sophie-Kutty sobbed. “I’m so scared – see, I’ve been followed!” and she nudged Langda, indicating subtly with her eyebrow. Langda looked where she had pointed and said soothingly, “Don’t worry Sophie-Kutty, that’s only Sila the hijda. She lives behind Elco and I’ve known her for years. She’s quite nice, really.”
“But she’s chasing me,” Sophie-Kutty whispered. “My grandfather knew this was going to happen!”
“Sussanna was a genius,” said Langda. “You know his penchant for double meanings. Take a closer look,” and he pointed at the headline.
Sophie-Kutty gave a little start. “Of course!” she said. “I should have seen it myself. It’s a simple anagram. Re-arranged, CASTRATING THE OUCH reads CHURCHGATE STATION. She tugged at his sleeve. “Let’s hurry!” and they raced across the overbridge.
The train pulled into Churchgate and the two stumbled out but Sophie-Kutty’s blood ran cold. Sila was lurching along behind them, pushing the other well-dressed Sunday commuters out of the way. They hid for a moment behind a milk booth and when Sila paused, Sophie-Kutty grabbed Langda’s sleeve. “He’ll never look here,” she said, and pulled him into the Gents. It was deserted but the stink made them retch. Then, a large graffiti on the side wall made them reel. Retching and reeling, they clutched onto each other for support.  “Ha ha! Vast armpit injuries itch,” Sophie-Kutty read aloud. “What can it possibly mean?”
“I know!” Langda shouted suddenly. “Quick! Can’t you see, it’s another anagram! My god, Sussanna was a genius! CHHATRAPATI SHIVAJI TERMINUS!”
The two ran out and piled hurriedly into a taxi. After the toilet, that whiff of Sophie-Kutty’s perfume was very pleasant to Robo.
“Jaldi, jaldi!” Sophie-Kutty begged the taxi driver when Sila began tapping on the window with threatening looks.
They shot off but Sila ran alongside. “Just ignore her,” the driver advised. Sila was keeping abreast, tapping on the window, sari flapping in the wind, muttering dire threats. “These hijras are something else,” said the driver, “they could make our country proud by joining the Olympics or the marathon. But no, all they want to do is chase my taxi.”
Langda was immersed in thought. Peering at the headline again, he gasped. “Sophie-Kutty, look at this! Castrating the ouch can be rearranged to read CATCH TOUGHER SAINT. My god the extent of Sussanna’s cryptic skill is simply amazing. Finally I know what he was trying to tell us.”
Langda rushed to the window and bought 2 tickets to Pune.
“It’s the Palki,” he explained to Sophie-Kutty. “It’s one of our oldest religious traditions! The greatest ever expression of spontaneous faith! A movement never sullied by politics or powerbroking! Every year, untold thousands of pilgrims walk from all over the countryside, through the birthplaces of the great saints of . Huge processions swell as they move from one village to the next, until they reach Pandharpur on Ashadi Ekadashi.
“Tukaram, Dnyaneshwar, Eknath – these names you have surely heard? The Bhakti movement influenced the course of our country’s religious history from the 13th to the 16th centuries. They preached the equality of all humans, the all-pervasiveness of the almighty, and that spirituality had no favoured language. Of course the Brahmins didn’t agree.”
Sophie-Kutty yawned, Langda was a History Prof, remember.
The train pulled in at Pune Station. Among the crowd of faces that milled on the platform, Sophie-Kutty spotted Sila, and shivered.
-        Will Sophie-Kutty and Robert Langda solve the mystery of Sussanna’s messages?
-        Will her grandfather send any more irritating anagrams?
-        Will Sila finally attack them?
-        Will Sant Dnyaneshwar’s sandals be returned to the Palki?
-        Read about it next week in the concluding part of The Dnyaneshwar Code.
First appeared in Sunday Mid-day on 2 July 2006
Posted by Saaz Aggarwal at 11:04 PM