Accept me as I am 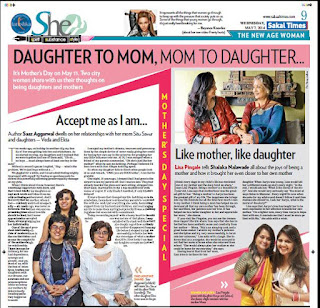 Ten weeks ago, on holiday in another city, my family of five was getting into two autorickshaws. As we started moving, my daughters and I realised that we were together and one of them said, “Uh oh … no boys … must always have at least one boy in the auto!”
Without a second’s pause I replied, “Hey – what’s the problem. We’re just boys without a …”
We giggled for a while, and I must admit feeling mighty impressed with myself for having so spontaneously bestowed this powerfully affirming gender-equality message on my girls.
When I think about it now, however, there’s something I appreciate even more, and that is how kindly my daughters accept such words and ideas from me without feeling embarrassed. And I feel sorry that my mother, whom I lost – suddenly and most unexpectedly – six weeks ago, was never so fortunate. She had her own uncompromising ideas about how life should be lived, but I never appreciated or accepted them, always grudging her her individuality.
One of the most prevalent relationship clichés of modern times is the one that delves and moans the complexity of the mother-daughter relationship. There is scope for intimacy, for mutual dependence, synergy and growth. And yet, most of us, with the best of intentions, burden our daughters with our dreams, our neuroses and our preconceptions while we betray our mothers by determinedly treading paths they begged us to avoid.
I escaped my mother’s dreams, neuroses and preconceptions by the simple device of never really giving her credit for having her own say in the universe; for grudging her any little influence over me. At fourteen, I was enraged when a friend of my parents commented, “Oh she’s just like her mother!” when he saw me knitting. Perhaps I believed I’d been born with that 100spm knitting speed.
So when my daughter fails to flinch when people look at us and remark, “Omg you are SOOO alike” I can but be grateful.
One night, fourteen years ago, I dreamt that I had gone to the airport to see my parents off. But I was too late. They had already boarded the plane and were sitting, strapped into their seats, inaccessible to me. I was washed over with waves of regret. If only I hadn’t dawdled, if only I hadn’t delayed!
It was a dream that changed my life. Latching on to its symbolism, I somehow convinced my parents to come and live with me. And I put everything else aside, demanding support from my husband and children, and rearranging my life to make them my highest priority. It was a challenging phase but executed with commitment.
Today, reconciling myself with a heavy heart to the ultimately one-way nature of that plane, I may be satisfied with a task well done but I also deeply regret how suddenly my mother disappeared from my life before I stopped trying, unsuccessfully, to bottle her into my stereotype of what a mother should be. How lucky I am that my daughter accepts me just as I am.
first appeared in Sakal Times on 7 May 2014
Posted by Saaz Aggarwal at 5:29 AM