In March 2014, after our mother Situ Savur died, my brother Ravi and I had to clear up her things and empty the house she was living in.

Sorting out her papers, one of the things we came across was a red India-Pakistan passport belonging to our father. It seems as if in those days, special passports were issued for travel between the two newly-separated countries.

Along with the passport was the correspondence which gave us some background: an application had been made on 20 June 1957 and the passport was issued less than a month later, on 16 July 1957. It was valid for one year.

The application for a visa to visit Pakistan is dated 11 July 1957, before the passport was issued. The visa was valid for only Karachi. 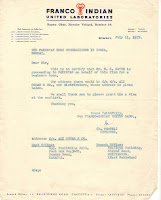 In 1956, soon after completing his MSc in Chemistry at National College, Bandra, Bombay (which is where, incidentally, our parents met) our dad, Ramanand Savur, joined Franco Indian, a pharmaceutical company in Bombay. He was twenty-two years old. He was appointed as Statistical Officer, and promoted to Assistant Publicity Manager a few months later. It was in this position that he travelled with his director, M Postel, to Karachi in August 1957, to appoint new agents, distributors and medical representatives. In Karachi, the distributor was Ali Gohar & Co, at an address on Bunder Road.
I knew that my dad had visited Pakistan as a young man. I had heard the awful story of how, as he and his French boss were leaving the country, his passport – this very red India-Pakistan passport! –  given to the police on entry, appeared to have been misplaced by them. My dad was taken into a room full of trunks each of which was overflowing with passports. The kind policeman started looking for his passport, opening one at a time, and putting it aside when it turned out to be someone else’s. This went on and on – it must have felt like hours. Eventually, when my father finally got his passport, he burst into tears of relief.
Sadly, I knew nothing else about this historic visit, not a single thing. Looking at the stamp in the red passport, however, it is clear that my father must have been in Karachi on the occasion of Pakistan’s tenth Independence Day! 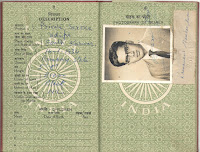 What were the celebrations? What did he see and do? How did he feel?
What else did he do in Pakistan?
I wondered whether my dad talked about his forthcoming visit with his future father-in-law, KJ Bijlani, a well-known lawyer of Hyderabad, Sindh who had left his homeland forever with his family and a few belongings, never to look back, ten years before. Surely my father visited some of the dear friends my grandfather left behind when he left Sindh forever? What did they say and do? Was there any way I could find out? 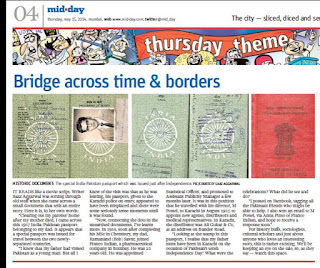 I emailed Sachin Kalbag, who was Editor of Mid-day at the time, and he kindly made space for the story. Then I posted on facebook, tagging all the Pakistani friends who might be able to help. I also sent an email to M Postel, via Anna Pinto of Franco Indian. I never heard back from Franco Indian. The only information I got was from Gul Metlo, a kind Sindhi doctor who lives in London. He wrote saying he had heard that Ali Gohar Shah had been a close friend of a Sindhi Hindu who ran a pharmaceutical shop in Karachi. He would come every evening to visit his friend at the pharmacy. After Partition, the Sindhi Hindu handed over his shop to Ali Gohar Shah to look after, saying that he would come back to Sindh from India after the riots stopped and things returned to normal. This never happened: almost none of the Hindus who left Sindh thinking they would return ever did.
Ali Gohar Shah, who was apparently a typical Sindhi Muslim and Syed with no business background, rose to become a big name in Pakistan’s pharmaceutical industry. It is said that he developed the business from a small shop to wholesale, distribution, manufacturing and a multinational pharmaceutical company as can be seen on http://www.aligohar.com/index.php though apparently he himself moved to Switzerland in the 1970s and settled there.

Posted by Saaz Aggarwal at 8:56 AM