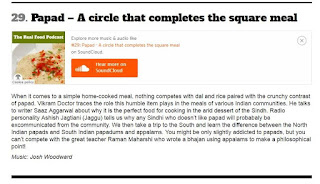 Vikram Doctor curates a very high-quality food podcast. A week or so ago, he called to ask me if I could tell him something about Sindhi papad. I was reluctant because, though I have written a book about Sindhi stories and all, I don’t really know that much. To be honest, I do enjoy my papad, but it is not a tradition from childhood meals or anything like that. I told him I’d try and find out what I could and a few days later told him what I’d found out.
When I listened to the podcast, I must say I was impressed with the depth of Vikram Doctor’s research. At the low end of the spectrum was my own voice – embarrassingly pontificating. There was also one moment in one of the podcast interviews which I felt was unduly facetious. There’s a fairly widespread tendency to mock Sindh and Sindhis and I feel it is necessary to avoid anything low and of that nature.
Papad is certainly a Sindhi staple – that much even I know. But not everyone understands the strength that this simple staple embodies.
In the old days in Sindh, papad was made at home. Women and children worked together in the angan, the courtyard, of the family home making the dough and rolling it out and laying it on mats to dry.
After Partition, families splintered, people moved to new homes and took time to settle down. Many enterprising women of families who had suddenly lost everything and had no means of income started making papad and pickle at home and walked from door to door, selling their produce to the better-off Sindhis in the towns and cities where they – equally displaced and confused – had settled, but not settled sufficiently to be making their own papad yet. Papad-making is a tedious and time-consuming process, and very soon more and more families were outsourcing from the displaced women who made it their profession.
Papad is eaten and enjoyed all over India but for the people of Sindh it has always been a staple. Sindhi hospitality is famous – when a Sindhi family is expecting a visitor, the first thing on their minds is what they are going to serve to eat and drink. A guest to a traditional Sindhi home would be greeted with papad and a glass of water, and this would invariably be followed by something more elaborate.
Nobody seems to know the origins of papad but in a dry and blazing hot province of very little rainfall, in a time before refrigeration and air-conditioning, before even the waters of the bountiful Indus were diverted into a widespread irrigation system, it’s easy enough to imagine the process of evolution by which papad naturally emerged from leftovers in Sindhi kitchens!
The most common Sindhi papad is made with a mixture of urad dal spiced with lots of black pepper. Some people add jeera, hing and other flavours. The stiff dough is rolled out into circles like extra-thin rotis, placed on mats and dried in the sun. The papad is usually roasted on a flame and eaten, but on special occasions it is deep fried.
Sindhis also make wadi, kheecha and kachri which are different kinds of dried ready-to-fry goodies. Wadis are little nuggets of dal ground up and dried in the sun and they can also be added to gravy dishes. Kheecha are also papad, but made with rice or sago. Elderly Sindhi women relish their memories of eating deep-fried miteranji kachri with saeebhaji-khichdi, one of the most popular Sindhi meals. In Sindh, kachri was made from traditional Indian vegetables like bhindi, gawar, karela and padwal, spiced with salt, chilly powder, amchur and other flavours, and dried in the sun. Nowadays, vegetable kachri is rare and the terms kachri and kheecha tend to be interchangeable.
Roasted papad is a must at each meal in a traditional Sindhi family. Even breakfast of loli or alu-mani, or syel mani is always followed by papad. Papad is such a strong habit to many Sindhis that they absolutely must eat it with every single meal.
Among the Sindhi Bhaiband community which has trading outposts in every port across the globe, papad is rolled, dried, packed in the home country and sent out to the men in distant lands. In the early pioneering days of the community, they bootstrapped in faraway countries, enduring hardship and working to earn money for their families at home. They often had cooks who took care of their meals, but papad was rare. As they became prosperous, they could eat whatever they wanted and often arranged for consignments of papad from home.
Posted by Saaz Aggarwal at 5:15 AM