The Shikarpur boy who built a Rs10K empire 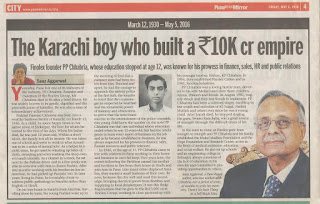 Yesterday, Pune lost one of its stalwarts of industry, PP Chabria. Founder and Chairman of the Finolex Group, Mr Chhabria died at 86 after a brief illness. He was widely known to be gentle, dignified and the personification of humility. He was also a man of extraordinary achievement.
Prahlad Parsram Chhabria was born into a wealthy business family of Karachi, on 12 March 1930. As a child, he spent happy times in his native town of Shikarpur, the love for which he carried to the end of his days. When his father died, he was just twelve years old. Within a short while, the family lost all its money. He was taken out of school and went to work in what turned out to be a series of menial jobs. As a helper in a cloth store, he got used to winding up bales of cloth, sweeping and even washing the shop owner’s lunch utensils. As a cleaner in a truck, he sat next to the Pathan driver and in a few weeks was able to converse with him in fluent Pushtu. After two months working with his brother-in-law in Amritsar, he had picked up Punjabi too. In later years, living in Pune, he invariably chose to address public gatherings in Marathi rather than English or Hindi.
On his way home to Karachi at the end of his stay in Amritsar, travelling alone by train, the young Prahlad woke in the morning to find that a currency note had been stolen from him. Shocked and upset, he had the courage to approach the railway police at the first halt, the tenacity to insist that the co-passenger he suspected be searched, and the remarkable power of memory and observation to prove that the note found was his: to the astonishment of the police constable, this young child knew the number on the note! PP Chhabria was that rare individual whose education ended when he was twelve years old but had the intelligence to learn every aspect of business on the job, and as he became established in business, he was always respected for his prowess in finance, sales, human resources and public relations.
In 1945, at the age of fifteen, PP Chhabria came to live with relatives in Pune working in their home and business to earn his keep. Two years later, the events following Partition caused his mother and brothers to flee from their home in Sindh and join him in Pune. Like many other displaced families, they started a small business of their own. By now he knew the city well and used this knowledge, bringing electrical goods from Bombay and supplying to local shopkeepers. It was this fledgling business that he grew to the Rs10,000 crore Finolex Group, working in close partnership with his younger brother, Kishan, KP Chhabria. In 1954, they established Finolex Cables and in 1981, Finolex Industries.
PP Chhabria was a loving family man, devoted to his wife Mohini and their three children, Aruna, Prakash and Sonali. In August 1981, tragedy struck and they lost Sonali to leukaemia. PP Chhabria had been a talented singer, excelling in the words and melodies of KL Saigal, Pankaj Mullick and others ever since he was a young child. After Sonali died, he stopped singing. His guru, Swami Ram Baba was a great source of strength through the difficult times of his life.
In the years to come, as Finolex grew from strength to strength, and PP Chhabria and his family established the Mukul Madhav Foundation and the Hope Foundation and Research Centre, active in the fields of medical assistance, education and social welfare. He also set up schools and an engineering college in Ratnagiri, always conscious of the lack of education in his own life and committed to providing opportunities to others.
first appeared in Pune Mirror under the heading The Karachi boy who built a Rs10K crore empire on 6 May 2016
Posted by Saaz Aggarwal at 5:05 AM